Mobile Apps uplifting the bar of Customer Experience in Sports

Let us start with a fact this time!! According to reports, the number of people with smartphone subscription is expected to cross an unbelievable 6 billion by 2020. So, it becomes a no-brainer to understand the impact of the mobile applications in our daily lives. Apart from our day to day activities, social lives and work, there is another area in which the mobile apps have shown their sizable influence and that is sports. 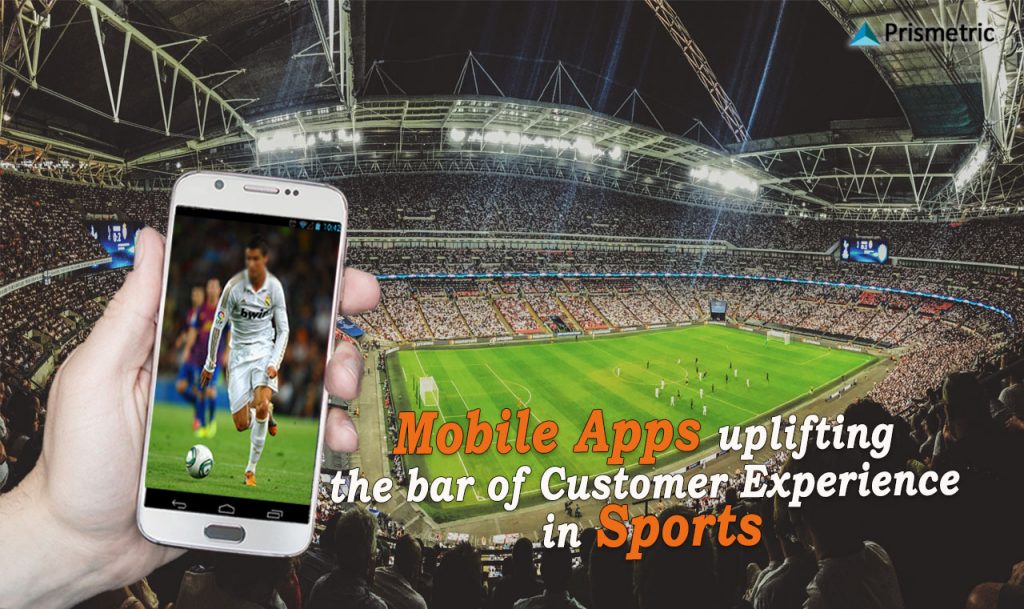 After the technology evolution, sports and marketing are deeply connected much more than the average fan thinks. Let us go a decade back and recall the memories of how we watched sports back then? How enthusiastically we followed our favorite sports team or person and couldn’t afford to miss them in action. Be it anything all the fans made sure that they can watch the action live or at least have the live updates. Right now we have all the dedicated mobile apps that will allow the users to watch their favorite matches live as well as their recorded videos and even better options to watch the most interesting part of the match again and again. The digital and mobile technologies are changing sports customer experience for millions around the world.

The present development in sports due to mobile apps and technology has been incredible as most of their viewers are the tech-savvy millennials who are always on the go.

So let’s dive in deep and understand the impact that mobile apps have on sports customer experience that has made them the game changer.

Changing the manner in which we do sports

Analysis and collecting data have been the major advantages brought in by the advanced mobile apps in the sports arena. Mobile innovations and digital transformations along with Big Data are now the most critical aspects as they sequentially arrange the number and statistics that helps the player in self-tracking and also keeps the users updated about the recent happenings.

You can see the changes in your surroundings as well. If you find people running doing exercises or even walking, you will eventually find them looking at their smartphones or synchronizing their Smartwatches with the fitness apps. The collaborative dashboards provided by the mobile apps will help the customers to understand the know-how of the game in detail and thus increasing their interests in the game.

The self-tracking wearable apps are also playing a major role in revolutionizing sports as everybody want to give a try at the innovative way their favorite sports star has been applying to be fit and staying on the edge. From the team’s point of view as well, they can adapt to new strategies and eventually improve their performances. The best example of this are the wearables that the football players wear in important games to know the distance they have covered and which part of the ground they have been to more often. The stats are also displayed on the screen during half-time and after completion of the game.

In the technical front also, brands such as Google and Apple are investing in the sports sector as they are expecting a five times faster growth due to the smartphone revolution.

Providing an all round coverage

Mobile apps have been instrumental in increasing the popularity of even the mainstream games such as cricket, football, hockey, basketball, athletics, etc. For example, the London Olympics in 2012 will be remembered as the first “Social Olympics” as they witnessed an outstanding response over social media. The digitization enhanced the experience on both on and off the field and led to a widespread participation of the fans. They have brought in innovative things like 3D screens, video mosaics, and immersive devices so as to engage the customers for longer periods of time.

The marketing aspect of the sports also made a huge uplift because of the all round coverage provided by the mobile apps. Now the digital marketers can reach the customers even to the remotest corners of the world with the help of mobile apps can give their consumers an overall experience.

Transforming the way we experience sports

With the mobile apps, the customers are no longer restricted to experience a live match only on the TV sets. Digital media and mobile apps are more than capable of giving a better and in-depth experience to the users and make their viewing time even more immersive. The dedicated sports apps act as a boon for the hardcore fans thus enhances their interest to the next level.

This trend will affect both in-stadium and out-stadium game viewing experience of the users and thus the mobile apps will empower you to connect with the fans even more profoundly.

Here comes the showstopper. With the revolution of the mobile apps and mobile technology, social media has become a very important platform to impart knowledge and connect people. Thus from the perspective of sports as well, social media platforms are probably the fastest knowledge medium for the sports enthusiasts. Micro-blogging site such as Twitter has emerged as a primary platform for the fans to connect with their favorite sports icon and also express their views on the team’s performance. Also through social media, the digital marketers can run in different sports programs to bring in new customers and grow their business to different horizons.

In addition to this, the gamification of sports has been a key motivator for users to participate in more and gain inspiration by comparing the scores of the fellow users.

Like the mobile apps have positively impacted all the industries they have been roped in, sports are not an exception. It has taken the level for an enthusiastic sports follower’s customer experience to the next level with their automated and immersive technologies eradicating the nuisance created with time and location boundaries. Moreover, the power of location-based personal content has even increased the reach of the local sports as well and made them a huge hit among the masses.