Know what iOS 11.2 Beta Versions has in the Bucket to Offer

Before the iOS 11.2 – the biggest change to the Apple’s mobile OS brought till date, make its way to the market, the beta version is released to let the interested users test the new iOS 11.2 beta 2 update and provide their feedback.

iOS11.2, the second beta release is rolled out just after a week of its first beta release with several features- ApplePay Cash, iPhone X, wallpaper, new pricing tools, a bunch of new emojis, bug fixing and pretty more coming down the road.

iOS11.2 beta 2 is considered as an iPhone X release and it has noteworthy additions for iPhone X owners. Besides, the latest release has a lot to offer to the older iPhone models. 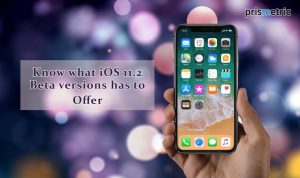 Let’s walk through all the significant changes which iOS 11.2 beta 2 has brought to the table:

It’s one of the best picks of the iOS 11.2 beta 2 version. Apple Pay Cash has alleviated the need for downloading an app by allowing the users to pay or receive money from contacts with the inbuilt messaging app or asking Siri. Yes, it can use the eligible cards set up in the Apple wallet

However, the feature is currently available to only the US people aged more than 18 and the beta testers using Apple beta software program. For the first time, the Apple pay cash service can only be used after the two-factor authentication, and thereafter the payments can be made seamlessly.

The update has released three new wallpapers, which were prominently appeared in the Apple’s iPhoneX commercials as ‘It’s Here’ to highly publicize the iPhoneX. Yes, the same live glitter wallpapers wherein the bright-colored sand is moving to the users’ 3D touch.

Since the release of iOS 11, the animation bug was not fixed. Actually, when the buttons were pressed in a rapid succession, a few numbers or symbols get ignored. For instance, when 2+3+4 is entered rapidly, the users would get 36 as the answer because the second ‘+’ symbol didn’t get registered.

Thankfully, the beta 2 update that has removed the bug so the users don’t need to pause in between while entering the numbers to gauge correct result.

The users are waiting for a long time for this feature support that provides a new interface for the smooth switching between two audio players. iOS 11.2 beta 2 has provided support for AirPlay 2. What the users needs are an AirPlay 2 enabled device and get the control over multiple playback options independently. Well, the feature rolled out is actually the groundwork that Apple has started doing for Homepod which works with next-gen Apple TV.

The modifications are trivial but improve the visual appeal of the iOS applications. A few more emojis are added, album art is introduced in the command center, access to the wallpapers launched with iPhone models latest release and loading animation for the live photo effects adds up the list.

The developer’s community has made it possible to charge introductory rates for recurring subscriptions on all the iPhones series. Offering the discounted price to the first-time customers of the auto-renewable services, and will definitely help the businesses draw the user attention. Now, it’s interesting to watch how developers can make the most of the feature for the different type of the services.

Excited to try out the new additions to the iOS 11.2? If so, install the beta 2 version now. Oops! But, don’t know how to install on your iOS device?

Here, we have enlisted a few steps following which you can easily grab the iOS 11.2 beta 2:

Finally, after your phone rebooted and everything gets finished, you will be landing on the home screen to test and enjoy the iOS 11.2 beta 2 features. Test it and share your views about the new version of iOS trending these days.

To top it up, there has been iOS 11.2 beta 3 updates on November 13, a week after beta 2. The important and more visible updates to speak about is the toggle behavior of Wi-Fi and Bluetooth in Control Center explained in a pop-up window. I’ll provide you with a more detailed update about the beta version once I have a chance to check it thoroughly.

There has been a wide range of usability and updates in the iOS 11.2 beta 2 updates and there is a lot in it, even for the iPhone app developers to provide the option to make things easier for the app users as well. So, when such a release from Apple’s camp makes it to the audience at large there is a huge number of takers found just enough to ensure that the features added are worth building on or there is more work to be done before it is finally released to the users.