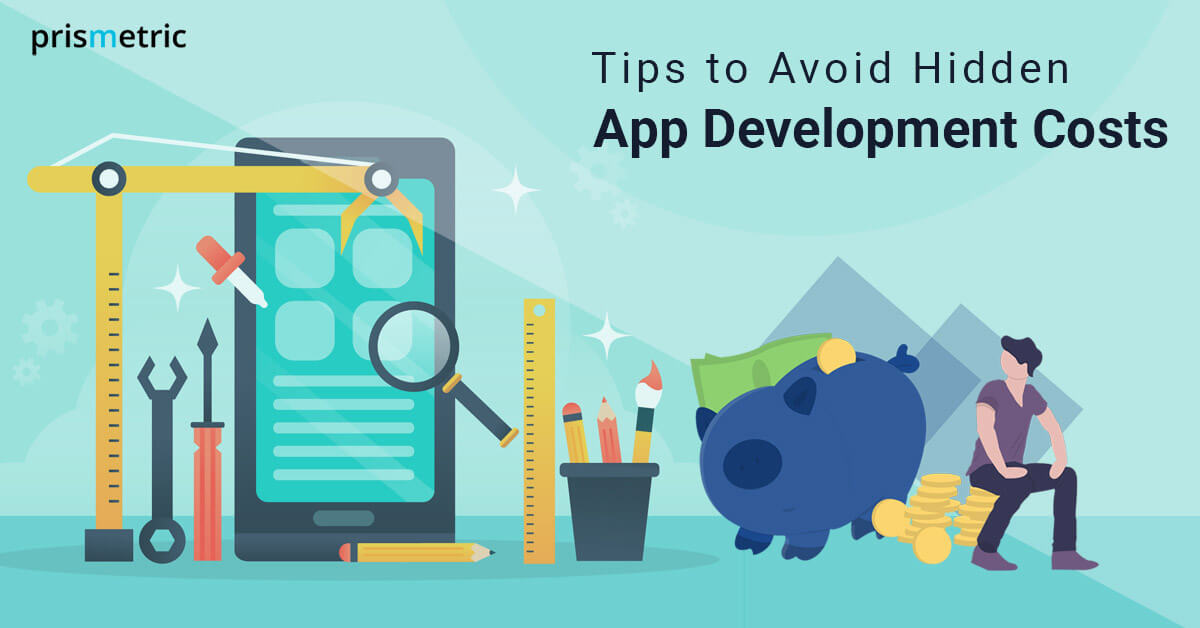 Businesses face a common problem associated with app development; they start with a rough estimate on the costs involved, and by the time the project is in Mid-stage, the costs have escalated beyond your wildest dreams. This situation puts you in a tight spot as you have to either increase the budget or publish the app with fewer features than you had originally intended to.

Mobile app development is often a lengthy process so businesses should hire the best app developer to ensure the development of the app is complete on a decided time, typically taking anywhere between 3-6 months to complete for a simple app. But, depending on the complexity of the app to be developed and the features to be included, it varies, and the time could also exceed accordingly. Hence, the above-mentioned problem rears its ugly head as businesses typically lose track of the expenses over a period of time.

Here are some ways you can maneuver these rocky waters;

List down all your requirements and have a RUD

It is always an excellent idea to have a budget in mind and a list of all the features you want in your app before you start approaching app development companies for estimates.

This will help you in creating a RUD (Requirement Understanding Document). The RUD is a document which entails all the specifics of the project by creating a RUD you and your developer will have a clear idea of the entire project.

Make sure to get a breakup of every feature that the developer will be charging you for, this way; you will have a measure of the costs involved in the app development process.

Apart from the above points always plan ahead and include in the RUD what would be included in the future versions and what would be the estimated costs associated with it.

Changing the scope of the app mid-way is costly; your app developer will definitely charge you more for adding some features which were not in the RUD. Hence it is better to have a thorough understanding of the features you want in your app and not deviate from it once you have finalized the features.

It is not uncommon for business owners to think that the app development costs are over once the app has been handed over to them. The thing is that there will be maintenance costs in your app which you will find out once the app is released to the user, this includes bug fixes, crash reports, and unusual app behavior, no amount of testing can prepare your app for the actual user environment. Factor in these costs while budgeting for your app. 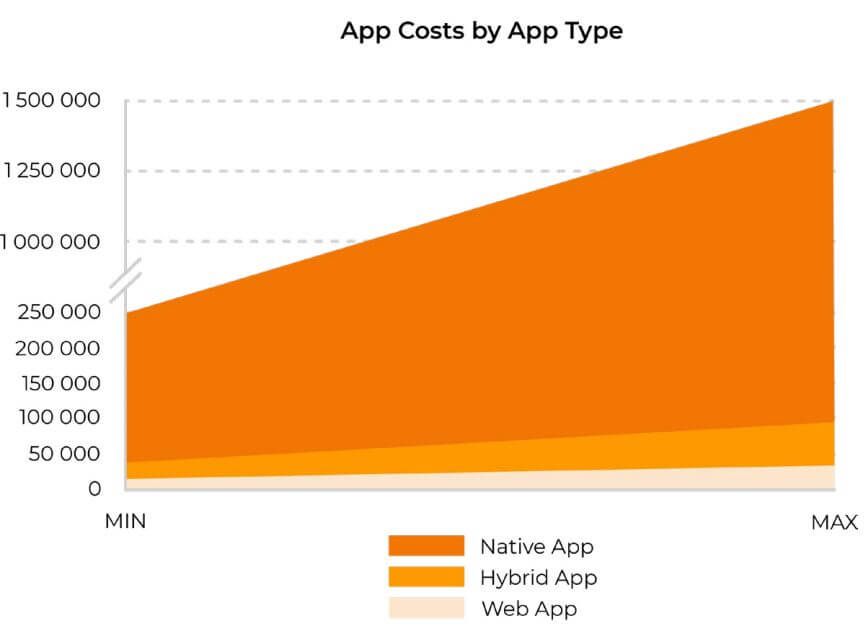 Enthusiastic business people tend to load their app with all the features and tend to think that a feature-loaded app will attract more users. On the contrary, users get scared away from such apps due to the complexity of use, the large size of the app, and loads of data it uses. For, eg. It is unnecessary for a fitness app to have access to your location. It not only increases the cost when you add such a feature but also freaks the user out who is adamant on guarding his/her privacy. Always include only the most essential features in the first version of the app; more features can be added in subsequent updates.

The average CPI(cost per install) for Android as well as ios apps are given below. 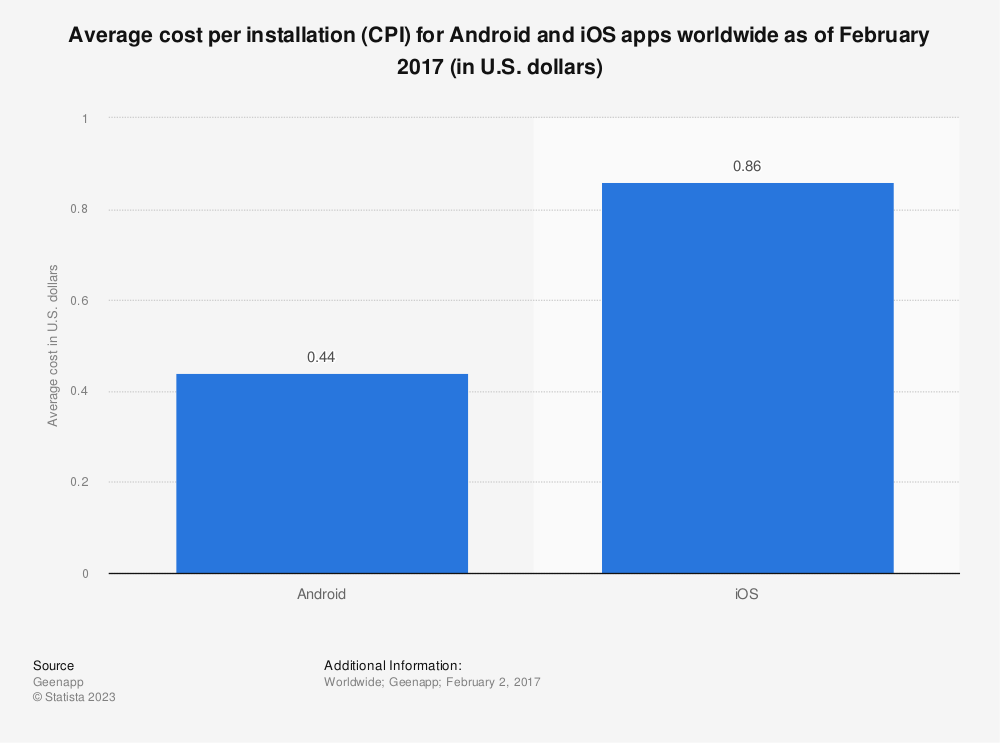 Looking at the above statistic, it is clear that the cost of acquiring 1000 customers would be 440$ for Android and even higher for ios. These are substantial costs and need to be accounted while calculating the total cost of the app.

There are millions of apps on play store and ios store vying for that coveted space in your smartphone. You have developed the app with an expectation that a large number of users will install it. Which apps are the successful ones? Those who get themselves in the top 10 or top 25 list of their respective app stores. According to research conducted by Fiksu’s, it cost companies around $200,000 to push the app to the top 25 in the U.S. Ios store. For this to happen, your app needs to be marketed and advertised, keep the marketing and advertising cost in mind while calculating the costs of app development.

The app development process is prolonged many times because the client was unavailable to provide the necessary feedback to the developer. Always stay involved in the process and give feedback when you spot an issue as corrections and feature additions after the app is complete would require more money. This leads to an escalation of costs, understand that app development is a team process and you are a vital part of this team. You will need to make yourself available for communication to ensure that the process is completed without any hiccups.

“Haste makes waste” This old proverb is valid for the app development process also. Developers who are pushed to their limits and expected to deliver on tight deadlines are often overworked and hence tend to make more mistakes, leading to more bugs and crashes in the app. This will lead to an inferior quality app which needs re-work, which is costly.

Apple charges $99 per year in fees for apps, while Google charges $25 for a lifetime. Also, bear in mind that you do not get your money instantly, app stores hold the money for some time before paying you. Apart from this, there is a minimum amount which is to be reached for you to withdraw your money this limit is sometimes as high as $250.

While designing the app, make sure that you have included sufficient security features. This will come in handy when your app becomes popular as web criminals might want to hack the data of your users. Sometimes laws like GDPR require you to include features which make the app compliant with these laws this increases the cost of the app.

In case you want to publish your app in the app store, then you will require to store the data on a server commonly referred to as hosting. Include the cost of hosting your app while budgeting so that you can have a complete idea of the costs involved in publishing your app.