The ever evolving shape of Mobile Apps

Time and tide wait for no one and so does the evolution of technology. The constant improvement in technology is widespread and mobile apps are no exception for it. And the speed of the change is such that the technology that was once considered as groundbreaking and unheard of is now an old-school and regular part of a strategy to reach out to people. 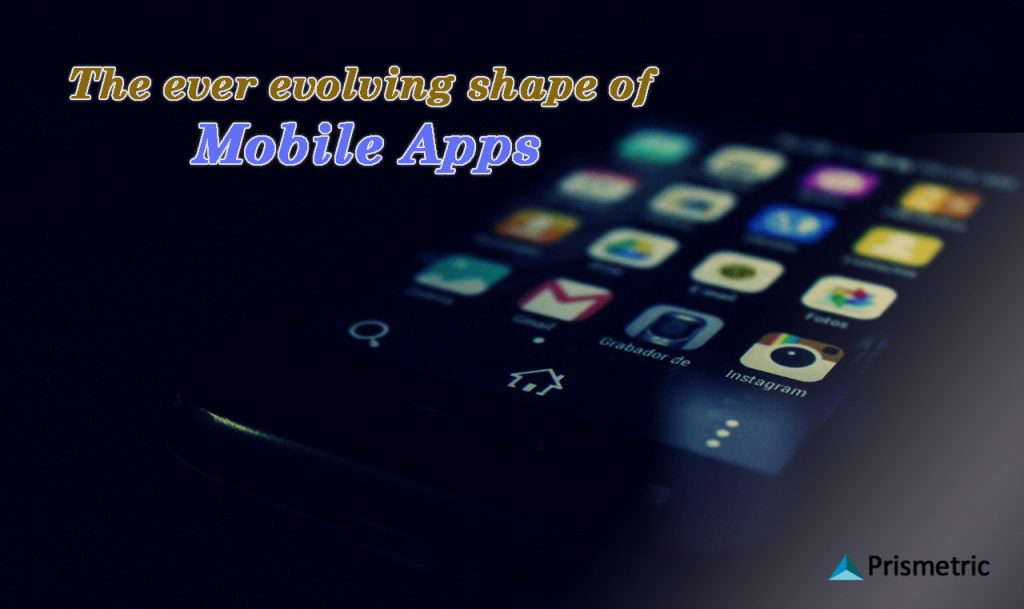 The new age mobile world is breaking the stereotype and moving with a more progressive approach. Today there are different apps according to their work, functionality, platform and even size. The changing shape of mobile apps is the mark of their agility and the proof of the fact that it has no constraints of shape and size in order to work. You name any device that works on the top mobile platforms in the market iOS or Android, the modern age mobile application work well irrespective of their shapes, i.e., from the sleekest smartphone to the big size tablets.

It is a widely acceptable fact that our world and lives revolve around mobile apps. And the apps these days need to be smart as they might need to support the new classes of devices that work with various technologies such as Augmented Reality, Virtual Reality, Internet of Things, wearables etc. Thus, the altered functioning of mobile apps can prove beneficial helping the mobile app developers to go about their business in a simple and lucid manner.

Let us study our beloved mobile apps and their evolving shape in detail.

The homecoming of Native and Cross-Platform apps

There were device specific or I should say platform specific apps during the initial period of mobile app development. But with the changing business preferences and needs, Cross-Platform apps gradually took center stage and have helped organizations in a different kind of work according to the requirement. This doesn’t mean that native apps are not capable of justifying their worth. Many organizations deploy both the techniques as per their requirement and reap rich benefits from it.

The flexibility of the mobile apps gives the companies the option to use them as required to fulfill the wishes and desires of the customer, thus making the whole process more customer-centric which is essential for higher ROIs.

Also Read: Here is why you need a mobile app even if you have a mobile website

Perhaps this is the most important thing that the evolution of mobile apps has brought in. With the new age mobile apps, the companies can now maximize their functions to the core and can emanate things so as to make the process of customer engagement worthwhile.

In the initial years, things like calculator and calendar were considered as apps inspite of being just a utility feature in the mobile phone. The essence of mobile apps has brought forward the real meaning of apps that they have a specific usability and thus started the bifurcation based on the usability aspect, such as messaging apps, gaming apps, social media apps, business apps, etc.

The process of changing shapes of mobile apps continued as the structure of the mobile apps changed. At first, when there were keypads for the operation, the usability was limited. But with touch-based smartphones coming to the fore off late the scenario has completely changed. The developers now have started developing apps that are according to the norms and trends of this ever evolving tech world, thus the mobile apps have become an aspect to be used for better efficiency

Customer centric mobile apps are the ‘Need of this new age’. We all know that there are a plethora of mobile apps rendering more or less the same services. The mobile app developers now believe in including only the needful functions that the users might use or need on a more frequent basis. This in-turn makes the app less clumsy, faster in execution and easier to use. Also, the tools are more automated with less possibility of mistake which helps in developing the app in less number of days.

Today a small number of developers units can create and develop apps with ease due to the advanced tools which will also reduce their app development cost. The app analytics also plays a vital role in providing the data to the developers based on the user’s behavior and concentrate on the aspects, that users are more likely to use or had more followers.

Also Read: How Mobile App user behavior differs according to the region

Mobile technology has brought the world to our palms. They are as ubiquitous as air in the present world. The advancements in the shapes of mobile apps have added to their functionality as well. Now, the mobile apps are competent and capable of addressing more functions simultaneously without any delay or lag.

From the users’ perspective, mobile apps are either free or cost almost a negligible amount and give unprecedented functions so that the customer can use them with ease. There are different types of apps for every gadget thus making them system specific as well as multifunctional. For instance, the apps can work as a gaming app and also simultaneously update the user through its constant running feeds. In addition to this, the wearable apps can assist its users in many ways such as in the fitness activity, keeping users updated about the latest happenings in the world, reading important messages and processing it intelligently as per requirement like Siri.

Multifunctionality of the mobile apps also helps the companies to earn more revenue on them and also keep the customer engaged for longer periods of time.

The changing shapes of mobile apps are indeed crucial for its betterment and will also allow the users to be up to date with the time. The agile development process followed by the mobile app development companies allows the apps to grow in the right direction and improve customers’ user experience on the whole.