Kotlin is one of the fastest-growing programming languages today. Ever since its launch, Kotlin has proven to be a major breakthrough in Android development. According to GitHub’s Octoverse survey, Kotlin ranks fourth amongst the fastest growing programming languages in the industry today. Ever since Google announced that it is going for a Kotlin-first approach, the Kotlin job postings have grown exponentially.

What is Kotlin Used For?

Kotlin is a popular cross-platform programming language that is used for the following applications.

Kotlin multiplatform is an SDK that allows the Kotlin developers to build apps that can run on both iOS as well as Android. A problem with other cross-platform app development platforms is that they do not allow the developers to use the native capabilities of Android as well as iOS devices. With Kotlin no such problem exists as Kotlin developers can build near-native apps that can utilize the inherent abilities of iOS and Android devices. Google has started promoting Kotlin as their preferred language for mobile app development because of the wide range of benefits that Kotlin provides to its customers. Hence whenever you want to hire android developers, it is essential to check whether they can build apps using Kotlin or not. We have outlined the most important benefits of Kotlin below.

Most of the developers working on Kotlin love the fact that Kotlin requires minimal coding to build an application. As it takes less amount of coding to build a Kotlin app, the time-to-market of the app is reduced significantly. The reduced time-to-market translates into significant cost benefits. Kotlin allows developers to write compact and concise code. Some studies indicate that in comparison to java, Kotlin reduces the number of lines of a code by a good 40%. Moreover, Kotlin also allows the developers to easily modify the code.

Whether it’s an Android app or an iOS app, app security is a feature that nobody can ignore. Kotlin is a secure framework that is devoid of device crashes and misconfigurations that creep into an application due to coding errors. Kotlin has enhanced immutability and null safety. Kotlin helps programmers build a more stable application.

Kotlin has got robust support from Google. In 2019, Google announced that Kotlin is the preferred language to build android apps. Google said that it would offer new features and APIs to Kotlin first. The ability of Kotlin to allow the developers to achieve the same results with less code was the primary reason behind Google’s support for Kotlin.

Compatibility is one of the differentiating aspects of Kotlin that makes it a stand-out performer in the industry. Kotlin is a very compatible language that could be used for both client as well as server-side development. Apart from this, you can use Kotlin for both mobile and web-based apps.

How to Hire Kotlin Developers for Your Requirements?

Like every other programming language, an ideal Kotlin developer will have a balanced combination of hard as well as soft skills. Here are the skills that you need to look for while selecting the Kotlin developer for your project.

The following are the hard or technical skills that you should check for in your Kotlin developers.

Questions to Ask Before You Hire Kotlin Developers

If you have a technical team member on board, then it is a good idea to ask a few technical questions before you select the developer. We have compiled a list of interview questions that will help you to hire Kotlin app developers.

Here are a few pro tips that will help you in hiring Kotlin developers. Consider the following three key areas to determine whether the Kotlin developers you hire will be a nice fit for your organization or not.

Where Can I Find a Kotlin Developer?

You can scout for the best freelance Kotlin developers on sites like Upwork, Freelancer.com and Fiverr.

To hire the best Kotlin companies, you can search on sites like Clutch, TopDevelopers.co and Goodfirms.

Here is the hourly cost of hiring Kotlin developers in various countries. Hire Kotlin app developers in India to leverage the cost-benefit that these developers provide. 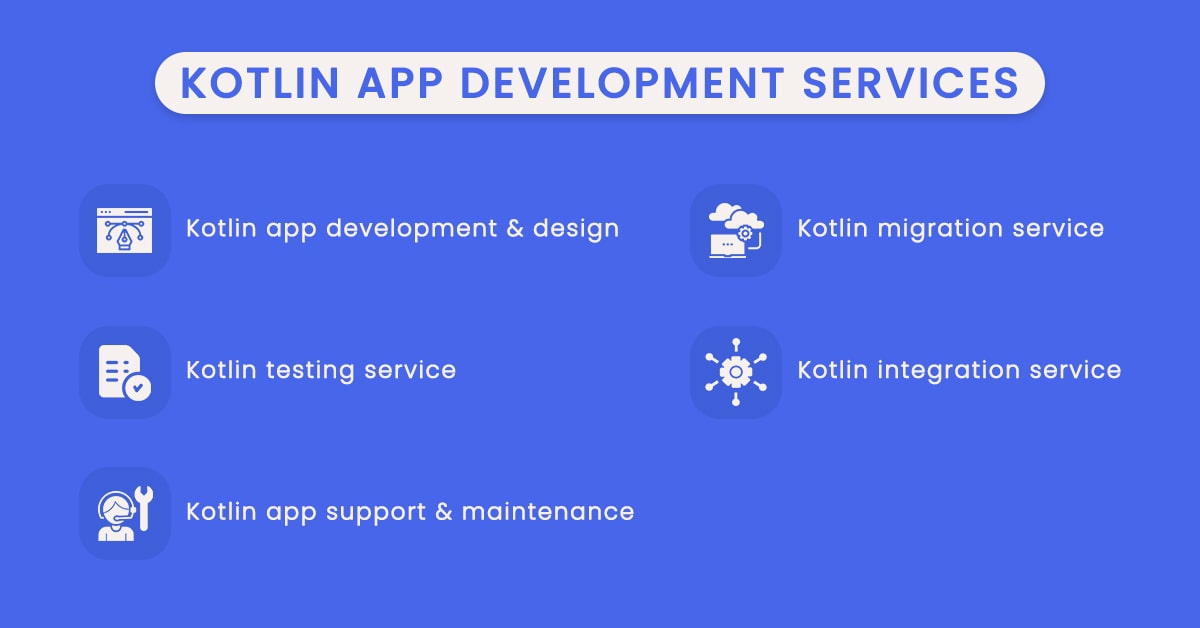 The design of a Kotlin app plays an important role in deciding its success. Our efficient Kotlin app developers will design and develop state-of-the-art Kotlin apps for your business.

Don’t fret if you want to migrate your app built on another platform to Kotlin. Our Kotlin experts will help you in migrating android apps from java to Kotlin.

Testing a Kotlin app is important as it ensures that the app performs according to expectations. We provide extensive Kotlin testing services that will help you build high performing apps.

Integrating Kotlin with other services is essential to enhance the capabilities of Kotlin. We provide Kotlin integration services to integrate Kotlin apps with back-ends, APIs and the cloud.

To ensure success of a Kotlin app, you will need to consistently update the app and remove any bugs that your Kotlin app encounters. We provide a high-quality Kotlin app support and maintenance service.

Kotlin has emerged as the technology of choice for many successful companies. Let us have a look at some of the famous companies that have used Kotlin.

Pinterest found out that by shifting to Kotlin, the company experienced a growth in the total number of users using the platform.

Coursera is one of the largest education companies, and it uses Kotlin to provide a great user experience.

Uber chose Kotlin due to the great code quality and the fast process of coding that Kotlin provides.

The world’s most popular online streaming platform has chosen Kotlin to provide a seamless experience to its customers.

Kotlin is an excellent technology that helps you build a secure app using the least possible number of coding lines. The fact that Google has started a Kotlin-first development approach for Android apps has led to the explosive growth of Kotlin as a coding language. Kotlin app development has got a significant boost with the launch of Android 12 as Kotlin allows the developers to leverage the power of Android 12. We at Prismetric have a team of Kotlin developers that can help you realize your dream of building a great mobile or web app.