Get your Business moving with Progressive Web Apps: Tips to Get Started and More!

Over the last three decades, websites had been ruling the market, but with the high proliferation of smartphones, mobile apps have become a well-established market and the world started shifting to mobile. The shift in app development trend merges two challenges for the businesses- going mobile with a responsive website or follow the native app trend. 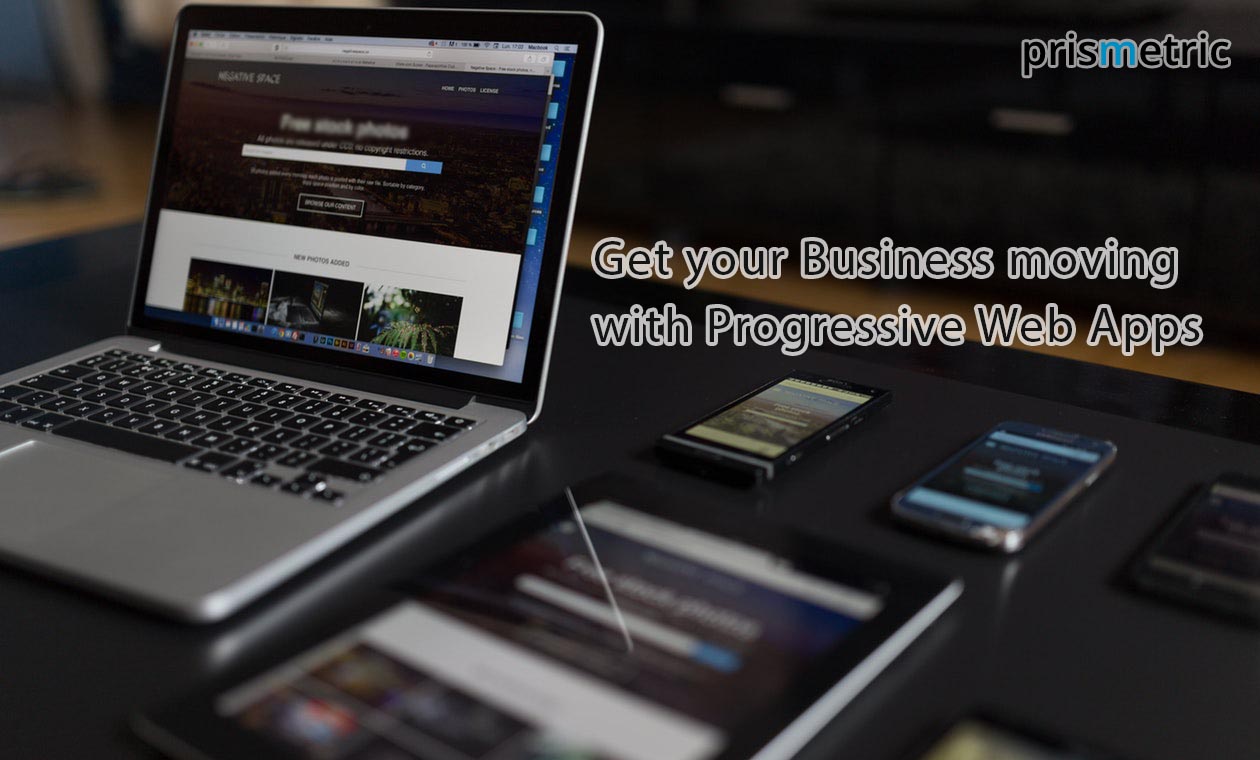 Both types of the development approaches have their own pros and cons that make both the options, either pleasant to prefer or barrier to adoption. There was no half-way between until 2015, when Google introduced progressive web apps (PWAs). In a nutshell, the web technology evolved this way:

In 2010, web development mattered a ton!

In 2015, Mobilgeddon progressive web apps made its way!

A lot has changed in a short span of fewer than 10 years. PWAs is the hot topic around the globe with their rising popularity and prominence due to the ample of benefits it offers. Before we start how PWAs work like a pro for the businesses

The PWA is a type of mobile web app, where the web apps developed functions like a native app, but don’t require the users to download from the app stores. The progressive apps use the app shell and web stack that gives the PWAs the mobile app-style gestures and navigation that run in the web browser. The web app in the native-flavor gets downloaded instantly, even in the low-internet connectivity areas due to service workers and with pre-caching, the up-to-date version of the app will be installed on the user’s device.

All in all, the PWAs are the web apps that function like a native app when they are browsed and navigated by the users. The core features make PWAs efficient, economical and advantageous, that’s the reason the businesses are giving thumbs up to them.

Let’s see how Progressive Web Apps can be beneficial for businesses:

The dollars spent on building PWAs are less as opposed to native app development because for the app has to be built for different platforms, more precisely for iOS or Android platform that significantly increases the development cost.

On the other hand, the PWAs with the same set of functionalities are cheaper to develop as they can be developed at the cost of simple web development. In this manner, the native app costs around $10k-$20k, while a PWAs can be built approx for the same cost and would work across various devices, alongside delivering a positive ROI.

Most often, the users are notified and bothered with a permission request to download the new updates. The updates to refresh the user experience sometimes appears quite a task to the users. Plus, the app store approval is another problem for the developers that are mandatory to complete.

These needs are eliminated with PWA approach. The updates coming to the app automatically appear to the users when they browse the app without needing to install any update in the background. The developers can roll out the update without any approval and waste the time in fixing the issues raised by the app store that makes it easier and faster to experiment with new additions and improvements.

The improved search engine ranking of the app depends on the app performance and user experience where PWAs excel. The progressive web apps load within 2-3 seconds that make them easily crawled by the Google bots and the app gets indexed quickly. The easy accessibility, performance, and searchability improve the user experience, which is the essence of SEO success strategy. The trick lies in the efficiency of the code used in the development, so hire an efficient web app developer to get the work done appropriately for you.

The top progressive web apps score 85% in SEO because they handle SEO tactically. The web app development and UI engineering are easier with PWA approach, but optimizing PWA needs a little effort using JavaScript as Google considers every web page of PWA like a JavaScript site. It’s not extremely taxing, the developers can optimize the website just the way Uber did.

With fast loading and low data usage, the PWA has the potential to deliver great results and contribute to the business success in the form of the increased average session, improved conversion, heightened ROI and repeat visits. It’s certainly the apps’ accessibility and searchability on the fly that captures the user’s attention and can take a hold of them.

West Elm, a home décor company prefer to complement the web presence with a progressive web app and in a period of less two years, the 15% increase in the average user session and 9% rise in revenue per visit is observed.

The Apple Store or Google play store has a specific set of requirements before publishing the app and it must adhere to their stringent guidelines. Sometimes, it demands for a huge time and efforts invested to make the app best fit with the app store requirements. When the process fails, it calls for several revisions.

No such situation exists with PWAs. The developers can publish and distribute them on various channels with no restriction put on.

The push notifications are proven as the best alternative to email, social posting or blog publishing for gaining the user’s attention. Thankfully, PWAs have access to the device-specific push notification functionality which provides a golden opportunity to the businesses to better market their offerings on the device which the target customers always keep with them.

Another valuable outcome is the notification that appears on the user’s device along with the app icon which adds to the brand recognition and draws the customer’s attention to the brand repetitively.

The high loading speed drives a positive user experience, which in turn, increase the conversion rate along with loyalty. The roadmap to success can be easily followed through PWAs.

The PWAs caches the text, images and other content that improve the web app loading speed and let the app perform impeccably. The flawless performance has a direct impact on the user experience which fuels the conversion rate and so is the business ROI.

Tinder has experienced with PWA, the load time cuts to half in comparison to a native app that has resulted in more swiping, more message sent, more in-app purchase, more profile editing, longer sessions, and expanded target market.

Having a good internet connection everytime is implausible, which makes it difficult for businesses to extend the reach to their customers in the areas with poor or no connectivity.

PWA has a solution to this problem with Fetch and Cache APIs in built-in service workers that caches the features or the pages the users have accessed before and then displayed them to the users even in the offline mode. In the event the users are trying to open the page that they have never visited before, then a custom online page is already created that’s shown to the users when no connection is available.

This capability is crucial to the retailers operating in low internet connectivity regions. Nigeria based eCommerce Konga has developed PWA at very low cost and enabling the customers to complete the transaction with 82% fewer data in addition to loading the app at 92% less data, that has resulted in less cart abandonment and improved the customer retention.

Increasing user outreach is possible only when the business app is available on all the major platforms. The native development is not affordable to every business and cross-platform development won’t offer the native-like experiences. Here, PWA rocks.

With PWAs, the businesses can provide uniform and consistent experience across all the devices and platforms just at the cost of building one app. Moreover, the PWAs are highly responsive and easily accommodate various screen sizes with the same settings. It’s a lucrative bet to place for the businesses, especially eCommerce stores.

Getting a head start with PWAs means your apps are more secure. The web apps use the HTTPS protocol to automatically encrypt the information which is sent over the network that prevents content tampering and snooping thereby the website content becomes secure with no risk of malware attack. The web Bluetooth technology is another add-on which enhances the app security.

The plenty of advantages of PWAs are impressive, but it makes sense for which type of businesses and when. It’s imperative to understand that every business doesn’t need PWA. Here’s the answer to the question- Who should opt for Progressive Web Apps?

There are a lot of factors that decide if the business needs an app-like experience on the web or not. The small or medium-sized businesses with optimal media content and faster loading time won’t require to complement the web presence with PWA. The reason is building PWA won’t bring reasonable changes in the user experience and user engagement for them in comparison to large businesses.

For instance, Flipkart, the eCommerce giant choose to build a Flipkart Lite, a Progressive Web App that has re-engaged the mobile web users and mobile users. Even, PWA becomes the new revenue-generating machine that’s driving a whopping 60% of purchases from customers who have uninstalled Flipkart native app. Besides, the company integrated “Add to the home button” prompt that has brought high-quality visits with 70% more conversions as opposed to average users. The two initiatives improved the engagement level by 40%.

If you are looking for extra downloads and conversion, provide mobile-first experience, and increase engagement, then it can be best for your buck in addition to a native app as more than 50% of the users don’t download even a single app in a month.

The weak spot of the technology is it’s not yet has gone into the mainstream, but still, if you want to embrace the trend, there is a lot you will explore. Again, it pops-up another question-

How can you get started with Progressive Web apps?

In order to build a progressive web app, the businesses have to first assess whether the PWA concept can help them in unlocking the untapped potential and if yes, either outsource the project to a Progressive Web App Development Company or if you have already had the resources to employ an in-house team.

For the app users, accessing and using the PWA is just a matter of 3 simple steps:

The progressive web app is the go-to choice for the plethora of leading players that are struggling with the upsides and downsides of mobile and web world. It’s easy to see why the universe is leaning towards them. The on-the-fly development, diverse range of benefits, and amplified user experience of PWAs is favoring the shift. What’s more? Progressing with progressive web apps is a way of the future, and that’s why considering the technology in the present will bring bigger ROI as promised.

The possible course of action- become a disruptor in your niche by engineering PWA and move your business to the top of the success ladder.