Apple introduced a new programming language called Swift at WWDC for the upcoming iOS and OS X projects. Swift is fun and innovative programming language for Cocoa and Cocoa Touch as it works side-by-side with objective-C. The company explained their huge surprise claiming it much fun and easier to use. You may use old languages and applications as well because it contains codebases for both Swift and Objective-C. Craig Federighi announced the new language saying, “We’ve used Objective-C for 20 years, and we love it. But we wondered what we could do without the babbage of C.” 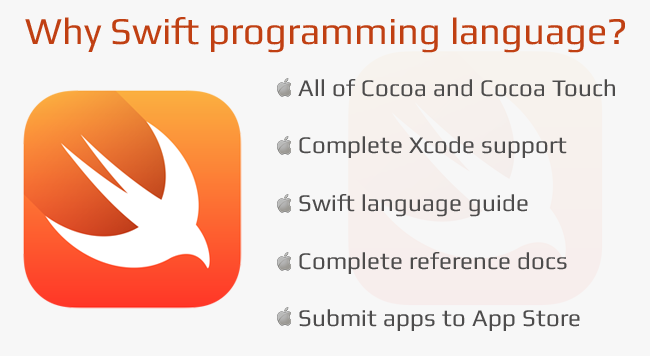 Swift- The new programming innovation is a result of latest research with the decades of experience in building Apple platforms. Apple demoed it easier for developers to write the less application code than ever. Its clean syntax makes APIs even easier to read and maintain while module skip the header and providing namespaces. Swift is integrated with the dynamic feature to make your code more expressive:
1. You can manage the memory automatically without typing semi-colons.
2. Closures unified with function pointers.
3. Have Tuples and other numerous return values
4. Generics, Structs to support methods, protocols and extensions.
5. Quick iteration for collection and range.
6. Functional programming patterns like maps and filters. 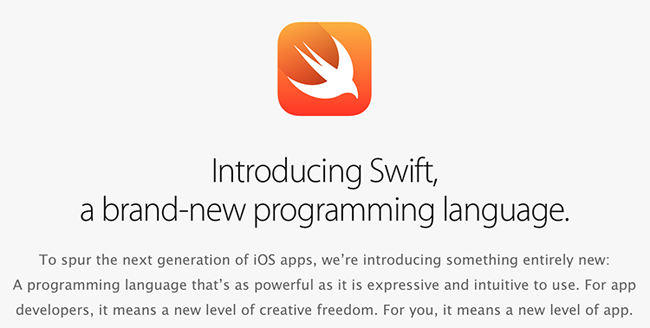 Swift has removed the unsafe code classes. Syntax is tuned to be easy. For instance, three-character keywords can define a variable (var). You can always initialize variables before you use, arrays and integers are checked for overflow and the memory can be managed automatically. Apple says that the Swift is over 93x times significantly faster than Objective-C apps.
Swift is the innovative programming language builds for fast, high-performance LLVM compiler with optimized native code which can be tuned to get modern Mac, iPhone and iPad.

Swift is integrated with the best features of C and objective-C programming languages that include low-level primitives like types and operators. It includes object-oriented features such as classes, protocols and other generics specifically designed for Cocoa and Cocoa Touch developers.

Writing Swift code is incredibly simple and fun. As you type the code, the result appears immediately. If your code runs over time, you can easily view the progress in the timeline assistant. Timeline assistant displays variables in the graph, draw each step while composing a view. The playground feature is designed to protect your code which facilitates you to:

So, we look forward that iOS developers will enjoy Swift. Developers can start using it immediately for adding new features in existing and new apps. And when you submit iOS 8 and OS X Yosemite this fall, you can easily submit Swift to the App Store and the Mac App Store. We can expect a huge change in programming for iOS and Mac Apps if Swift is a revolutionary change as Apple claimed.