MEAN Stack vs MERN Stack: What Should You Choose? 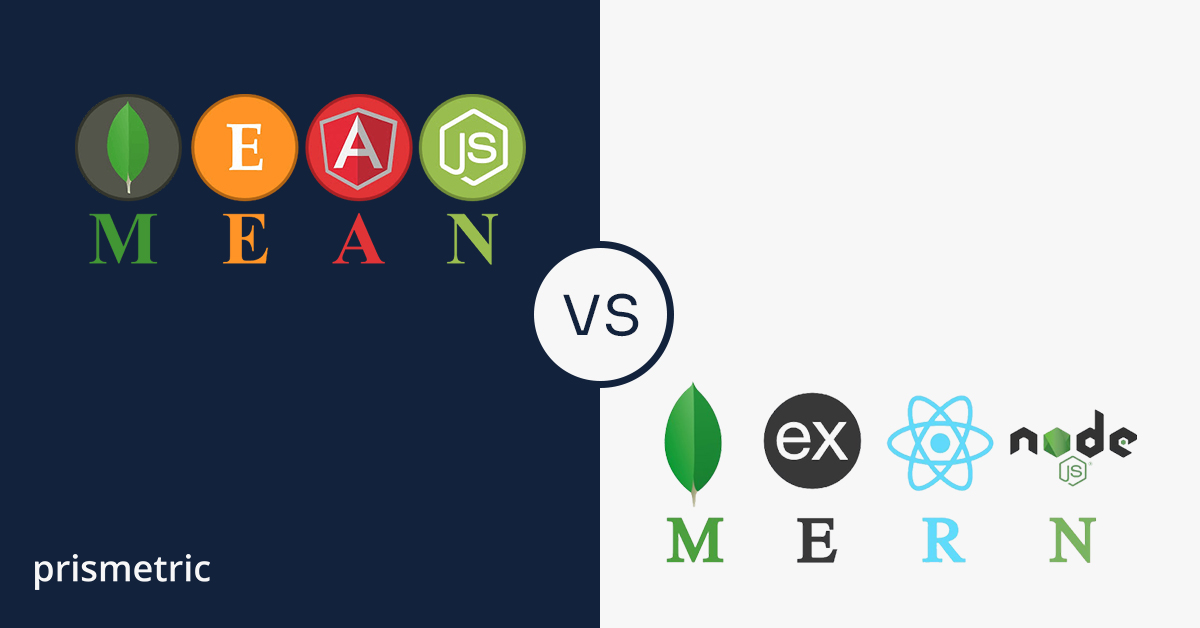 Selecting the right technology stack is important to ensure the success of your app. MEAN and MERN stacks are two popular technology stacks that are used by developers to build their apps.

MEAN stack includes Angular, while MERN has the React.js framework. 40% of developers use React.js as compared to 23% using Angular for web development.

There is an ongoing battle between the MERN stack vs MEAN stack, and many people are confused about which one to choose for their project. Whether it’s a mobile app project or a web application development project, the choice of tech stack has an overbearing effect on the project.

MERN vs MEAN stack: which one should you choose as your development technology? The answer lies in learning the basics like the benefits of each technology and the major differences between the two. Let’s start with a look at what MEAN and MERN stack is?

What is MEAN Stack?

MEAN stacks is a popular open-source, JavaScript-based full-stack technology stack. MEAN stands for MongoDB, Express.js, Angular, and Node.js, respectively. The programmers use the MEAN stack to building dynamic web sites and web applications . MEAN stack provides the developers with essential plugins and tools to build all kinds of mobile and web apps.

MEAN stack provides a wide range of benefits. We have identified the most notable ones below.

MEAN stack allows the developer freedom to switch between client and server-side operations. The MEAN stack developers have access to a standard coding language. This simplifies the development process.

The MEAN stack developers can easily leverage the code-sharing feature of the MEAN stack. With isomorphic coding, the developers do not need to write separate code for Android and iOS applications.

Looking for MEAN experts to develop your business app?

What is MERN Stack?

MERN stack is another decent open-source tech stack that can be categorized as a full-stack development technology. The term MERN stands for MongoDB, Express.js, ReactJS, and Node.js. The developers can build hybrid mobile as well as web apps using the MERN stack.

MERN stack is a group of JavaScript-based frameworks that provide a smooth development experience. The MERN stack provides an end-to-end framework for developers and is fast becoming the technology of choice for many developers.

As the MERN stack consists of MongoDB, the developers can store data in flexible JSON files. This makes it easy for the developers to combine data with JSON-like file storage systems.

The learning curve happens to be a major difference in the MEAN vs MERN battle. MEAN stack is a pre-configured framework. This MEANs that it might not be an easy-to-learn framework for newcomers.

MERN Stack is relatively easy to learn the framework. This is because ReactJS has rich documentation that allows the developers to easily get all the information they want. MERN stack developers are easier to hire as the learning curve is not that steep for MERN stack.

Winner: MERN Stack because with MERN stack, you get proper documentation that makes it easy to learn the framework.

With the MERN stack, the scenario is different. As the MERN stack is still evolving, the developers need to do extra work to integrate third-party libraries. MERN stack does not have an extensive range of libraries to fulfill all the requirements of a project.

MEAN stack is a pre-configured framework. This MEANs that you are bound to get slightly better performance with the MEAN stack as compared to the MERN stack.

Winner: MEAN Stack, because it is a pre-configured framework and thus offers better performance as compared to MERN stack.

In case you plan to build large-scale projects, then go with the MEAN stack. This is because the web architecture of the MEAN stack is independent of the intermediate layer.

Winner: Draw, both MEAN and MERN stacks have their own data flows. Both these data flows are perfect according to the type of project.

MEAN stack has higher security than the MERN stack. This is because the MEAN stack is built using scalable frameworks supported by JWT(JSON web token). The MERN stack encrypts sensitive data and prevents unauthorized access to data.

While MERN stack does provide authentication methods, these methods prove ineffective against attacks like CSRF.

Winner: MEAN Stack, MEAN stack provides strong security and ensures that the session data stays on the client side and not on the server side.

MEAN stack allows you to switch between clients and servers. MEAN stack is ideal for developing real-time web apps.

MERN stack uses DOM to allow the developers to build web apps fast. You can reduce your web application development cost for small apps if you choose the MERN stack. In the MERN stack, even stable ReactJS code uses unidirectional flow. Hence if you want to build a small app, then go for MERN stack development services.

MEAN or MERN, which is the one?

MEAN stack will be the ideal technology stack for enterprise-level projects. MERN stack will help in building small-scale web apps. MEAN stack holds the upper hand in areas like code upgradation, testing, and scalability. In comparison, the MERN stack has an easier learning curve and provides a close to native experience.

There is close competition between MEAN and MERN stack. Sometimes it becomes very tough to choose from one. In such cases, it is best to take expert help. We at Prismetric have established ourselves as one of the top full-stack development companies in the industry today. Hire Full-stack developers from us and we will assess your project and help you choose the best tech stack between MEAN stack vs MERN stack.