In terms of the sheer number of devices running on it, Android is the world’s most successful mobile operating system. Android is virtually omnipresent as around 72% of mobile devices run on Android. A business that wants to maximize its reach amongst users worldwide has to adopt Android for their mobile app development platform. Many entrepreneurs who have brilliant ideas for mobile app development tend to go with Android due to its popularity.

For non-technical people who do not know much about mobile app development, the first and foremost thing is to find a team of efficient Android developers. This article aims to help businesses to hire Android app developers for building a great Android app according to their needs.

The Android platform provides businesses with easy access to an ever-growing user base. However, businesses can face some challenges that might derail their app dream. Let us look at some of the critical challenges that a business can face in the development of an Android app.

Software fragmentation is an issue that even experienced app developers face on all major platforms. However, the challenge is bigger for the Android platform. You will need to find professional Android app developers who can take into consideration many different Android versions and devices when they develop the app. Below is a chart detailing the number of versions that the top Android app needs to support to maximize its reach. 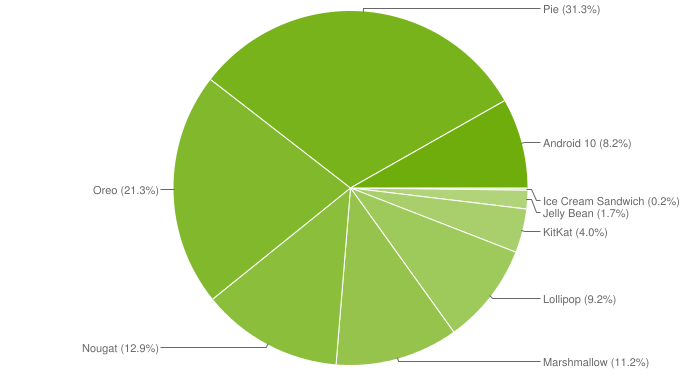 The multiple types of devices that run the Android OS make things worse for the Android app developers. Before they deliver the app to their client, the developers of Android mobile applications need to test whether the app runs smoothly with respect to different keyboard forms, camera buttons, and screen sizes.

Patent Infringement and Litigation are rampant in the Android ecosystem, and many businesses have faced lawsuits in various countries for violations of patent designs. Unlike Apple, there is no mechanism in Android to ensure no duplication of features in Android apps. The Android app owners are at a constant risk of facing patent infringement litigations due to lax duplication prevention mechanisms in Android. If things go wrong in the courtroom, then these legal issues can prove costly for the client and the Android app developers.

While Apple ensures that each app published on its platform follows strict guidelines, Android is very flexible in this regard. Many malware issues arise in Android devices due to Google’s flexible app publishing policy and due to the vast array of hardware and software components in Android devices available in the market. As a result, many Android apps face serious security issues like the stagefright MMS flaw, Android FakeID issue, and Android installer hijacking.

High cost of Marketing the app

There are more than 3.5 million Android apps in the Google play store. The sheer number of Android apps makes it very difficult for an Android app to stand out from the crowd. The marketers of the businesses who own the Android app have to work hard to ensure greater app visibility. To succeed in the highly competitive world of Android, marketers have to prepare a robust app store optimization strategy and ensure that the app has the correct name, a unique app icon, and has the right keywords in the app description along with high-quality videos and screenshots. The Android app owners often find that the Android app marketing costs are higher than their expectations.

A question that arises in the mind of business owners is that if there are concerns regarding Android development, why choose Android for app development? There are a few explanations why Android happens to be the most popular mobile app operating system in the world today to develop business mobile applications. We have detailed the most prominent reasons that will help you differentiate Android from other mobile operating systems and make it easier for you to hire the right Android app developers to develop your mobile app.

A major reason to choose Android for app development is that it is an open-source app development platform. Android is not only free to use, but it also allows businesses to modify the OS according to their needs. Businesses can customize the Android app experience for their users by developing their own custom ROMs.

As Android is open-source, there are no licensing costs associated with it, a fact that helps it make the most used mobile operating system in the world.

Do you want to target the maximum number of mobile device users? Then Android should be the platform on which you should build your app. 7 out of 10 devices in the world today run on Android. A significant reason why most devices run on Android is that Android is open source. Android does not charge license fees to manufacturers who wish to install an operating system on their devices. 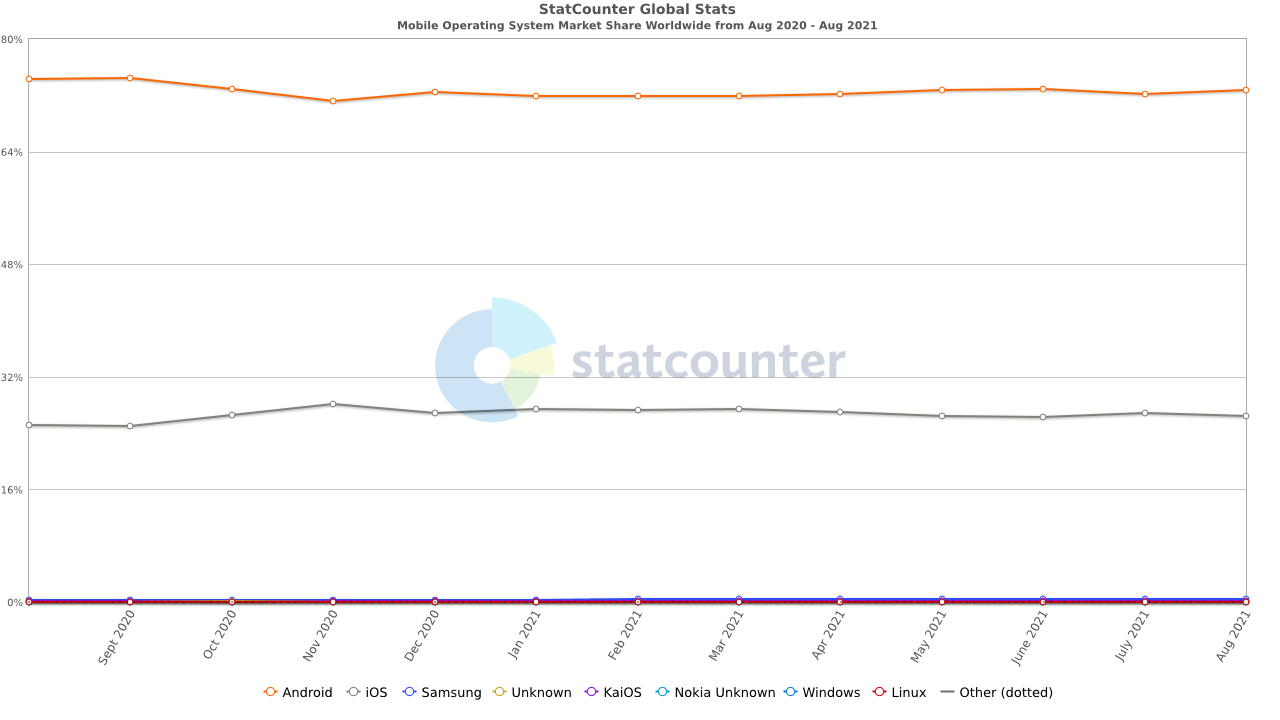 A business can choose to deploy its app on multiple app stores like the Amazon app store, AppGratis and MoboMarket, in addition to the Google play store. A business can even choose to build its own distribution channel to reach out to its app users. On the other hand, Apple does not allow this flexibility, and iOS developers can deploy their apps only on the Apple app store. The ability of an Android app owner to reach its customers through multiple channels provides a boost to the reach of the app.

As Android is an open-source platform, there is no need to purchase the Android SDK to develop an Android app. Professional Android app developers for hire are easier to find as Android coding is based on Java, a very popular programming language.

Also, there are no licensing fees that make Android most cost-effective for Android app owners.

App owners do not want their app to crash as it would ruin the user experience. Android solves this issue as it is a Linux based platform that helps app owners build a stable app.

Apart from being stable, Android is also a very secure platform. The Android security functions run in a TEE (Trusted Execution Environment) to ensure that the OS stays safe.

Sandboxing in Android ensures that the apps are separate and data clean. The Google play protect feature detects and blocks malware threats. Google safe browsing feature protects the users from phishing attacks. The SafetyNet API adds another layer of security by checking the managed devices before allowing them access to data.

Android has the support of a tech giant like Google, which acts as a major positive factor for the operating system’s growth. Google, along with its other platform partners, has been heavily investing both money and resources to ensure that Android becomes a world-leading mobile operating system.

Android is an easy to learn platform that allows Android app programmers to start work on it immediately. The community of Android developers has seen unprecedented growth over the past decade.

Roles and Responsibilities of Android App Developers for Hire 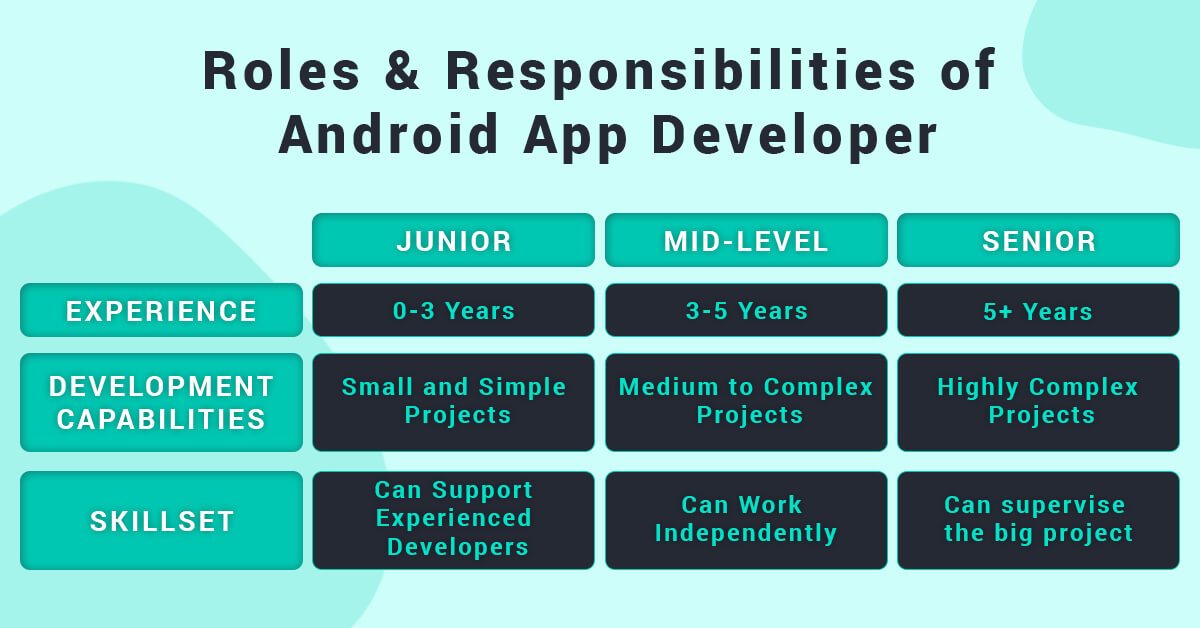 The Android app project varies in size and complexity. Depending upon your project needs, you can hire remote Android app developers with different levels of experience and expertise. Mentioned below are the three types of Android developers for hire that you can choose from.

Regardless of the experience level, what skills are necessary for an Android developer you want to hire? Well, two types of essential skill sets are required to succeed in the arena of Android app development, hard skills and Soft skills. You should try to hire Android developers that have a perfect mix of hard as well as soft skills.

Expertise in Java is a must-required skill for Android app developers as Java is the most popular programming language to develop Android apps.

If there are any bugs found in code, a skilled Android app developer should be able to fix bugs in code no matter who wrote it.

The Android developer should be able to work easily with XML/SOAP and JSON/REST APIs.

The Google Play experience includes uploading as well as updating applications in the play store.

An Android developer will need to collaborate with designers, testers, project managers, and clients to complete the project. Good communication skills are essential to collaborating efficiently with team members and clients.

A proficient Android developer should constantly learn new things to keep up with the evolving Android app development trends and market demands.

Project delays cause loss in terms of money, but they also create a bad reputation for the company. To avoid delays from the development team, the Android app developers should have basic time management skills. 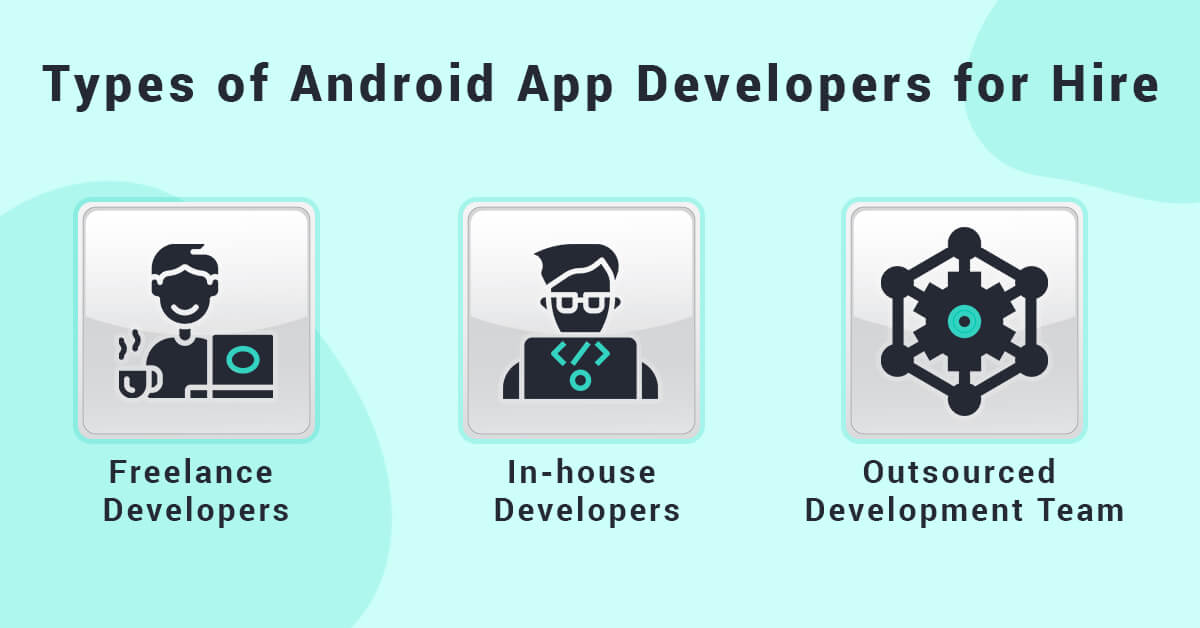 Let’s look briefly at each engagement model to choose the most useful according to your business objectives.

The choice of the engagement model depends on the project’s scope, budget, and the specific requirements of the project.

For light work and a limited budget, hiring freelance Android app developers would be the best choice.

For a medium to complex level project hiring in-house Android app developers would be a better choice.

Hiring an outsourced company for Android app development is the best option if you want to hire the best talent globally at an affordable price without the hassle of hiring full-time employees.

Select most suitable Android developers for your project.

How to hire Android developers for your requirements?

Decide the goal of the project

Once the goal of the Android project is defined, the search for ideal Android app developers becomes much easier. On the contrary, if the goal is not defined, then you might end up choosing a company that proves to be the wrong fit for your organization.

Some Android app developers accept all the suggestions of the client. You need to be alert with such developers as it shows that they lack ideas about the technicalities of Android development tools and processes.

Can the developers properly select a technology stack? 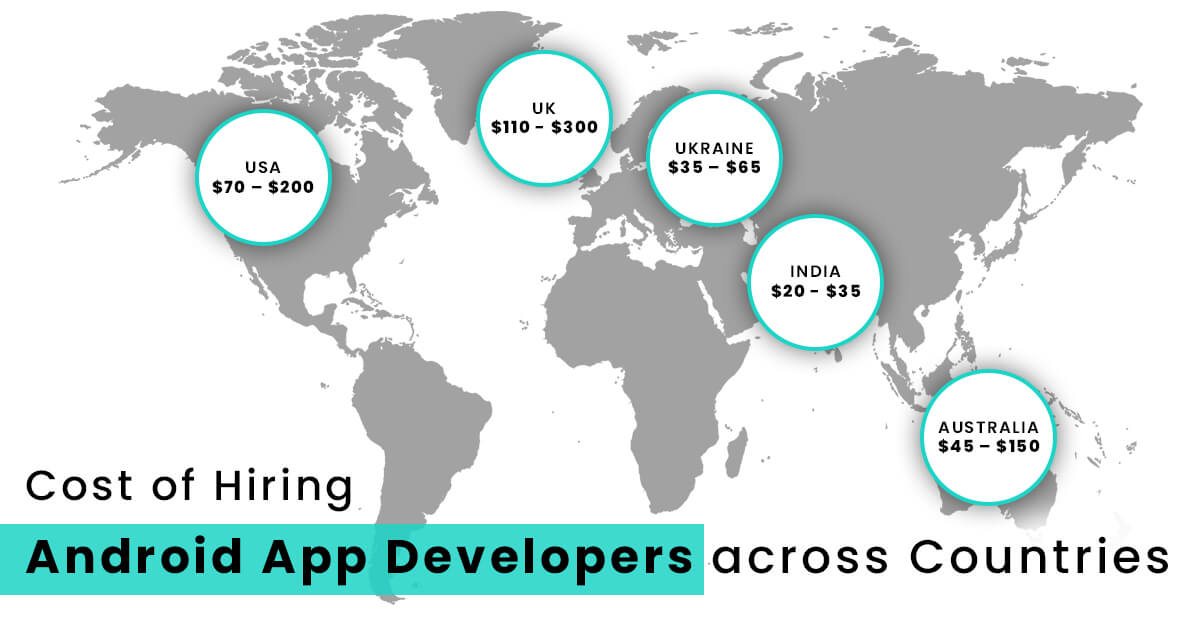 Questions to ask while hiring an Android developer

Hire our Dedicated Android App Developers to materialize your idea into a fully functional Android app. Connect with us and get started! 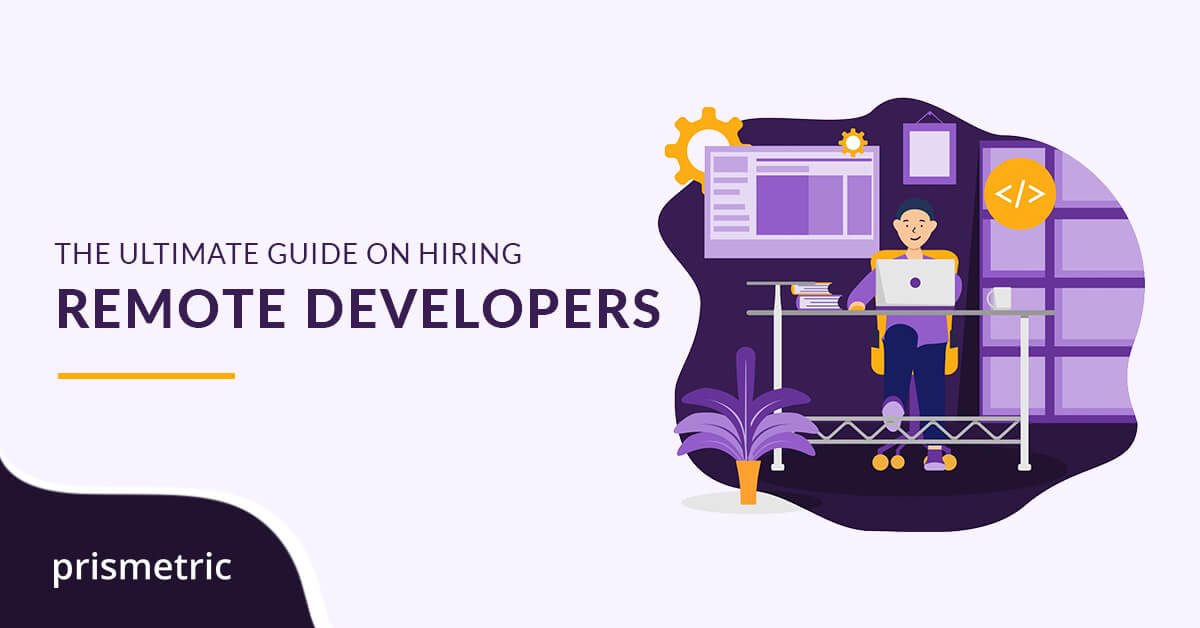 How to Hire Remote Developers? A Complete Guide 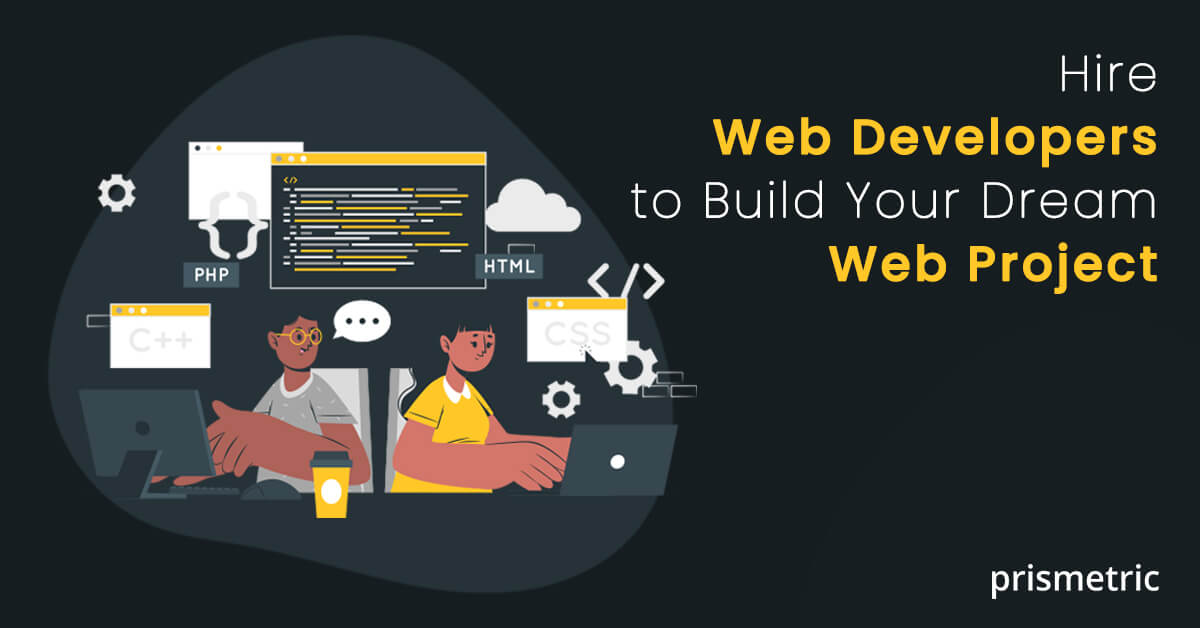 How to Hire Web Developers: A Complete Guide