Integrating ML and ARKit to iOS platform for better Services

It is a wide known fact that 20 years down the line, i.e. in 1997, Apple was on a brink of bankruptcy and it needed an investment of $150 million. 10 years later, Apple showed the world its first smartphone when it came up with the first edition of the iPhone series. And now, a decade later, at Apple’s WWDC 2017 event, it is here with the newest version of iOS 11 showing the world that what lies in the future of mobile OS and app development. 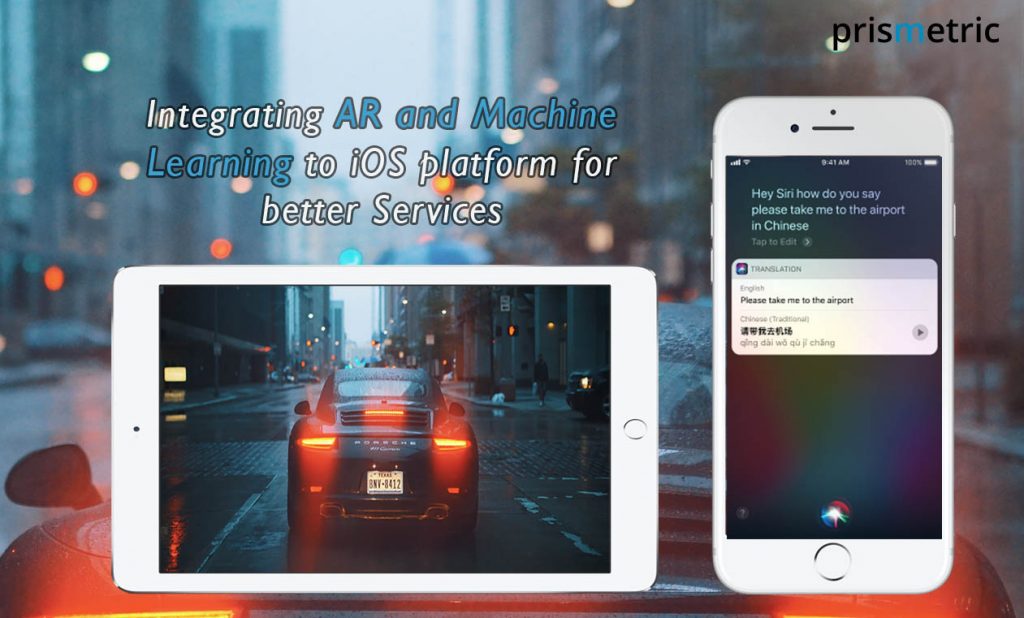 The success of Augmented Reality with the game PokemonGo last year had a very serious impact on the tech market as the companies began to think AR as a serious technology and including it in various aspects of the business. With iOS 11, Apple has tried the dame thing by including apps powered by augmented reality in the OS itself, so as to give a more intriguing app experience to the users.

Therefore, it is only apt to look in detail how integrating Augmented Reality and Machine learning will enable iOS to render better services to its customer and also give the developers a chance to be more innovative.

The services catered by iOS were still the best among its contemporaries. With the advent of AR technology, last year bringing in quick success brought an aura or I would say “the need” of integrating the latest technology for better and more enhanced user engagement and experience. The improved iOS 11 platform will be the medium of bringing in Augmented Reality to millions of iOS devices and will be apt for the developers to make use of the virtual content at the top level. Also, with core Machine Learning, the developers will have the ease of developing apps that can be replicated on other compatible devices to cater ML capabilities, thus making the apps more intelligent.

Let us understand each of the technologies one by one;

The Introduction of Augmented Reality

With the introduction of ARKit with iOS 11, Apple has given a new framework that will allow the developers to create some profound and amazing AR experiences for iPhone and iPad. There is no need to include any external software as the inbuilt one is capable enough to give the all round experience to the user. The ARKit will blend the digital objects and the information in them around the user and take the apps beyond the screen to make them interact with the real world.

The ARKit will use a VIO (Visual-Inertial Odometry) that will help in tracking the physical objects around it with optimum accuracy. VIO has a special feature of fusing the camera sensor data with CoreMotion data and these inputs will allow the devices to sense the things with higher accuracy without any additional need for software or hardware.

The AR technology will analyze the scene that is presented before the iPad and iPhone camera and find the horizontal planes like tables and floors in the room. It can place the objects on them in order to track it and also make the camera to estimate the amount of light in it. It can adjust the amount of light required according to the virtual objects so that the user would not have any problem in seeing them.

ARKit will run on Apple’s A9 and A10 processors in order to deliver breakthrough performance and enables fast scene understanding. It lets the user build a highly detailed and strong virtual content superimposing on the real world scenes. In addition to the integration, the ARKit optimizations will also be available in Scenekit, Metal, and the third party tools like Unreal Engine and Unity.

ARKit will be used with iOS 11 beta and the latest Beta version of Xcode 9. Also, the iOS11 SDK will help in building AR features in the app.

The Introduction to Machine Learning

The inclusion of machine learning will enable AI to reach new horizons that were known beyond reach about half a decade ago. The foundational machine learning will be applicable across the Apple products including a camera, Quicktype, Siri and enable them to deliver blazingly awesome performance every time. The easy integration will help in making more intelligent apps with enhanced features with lesser and easier codes.

Machine Learning will let you integrate models on a broader perspective in your mobile app. It supports extensive deep learning with more than 30 layer types. Apart from going dynamic in its work, it also does well with the standard models such as SVMs, linear models, etc. As it is built on low-level technologies, Core ML will take the advantage of the CPU and GPU in order to render maximum accuracy during the performance.

The NLP APIs (Natural Learning Processing) use the deep learning to understand features such as language identification, part of speech, entity recognition and much more. Features such as face tracking, text detection, barcode detection, etc. will also be included in the frame of things by Core ML.

Mobile technology and iOS app development have seen some unforeseen changes in the past decade and Apple by far have been the pioneer of it. With the inclusion of Augmented Reality and Machine Learning, it has now set a new magnitude for times to come. The glimpse that Apple showed at WWDC 2017 is certainly encouraging for the app developers and also for the users.

He loves challenges and adept at finding tech-solutions that complement business ideas. He strives to leave no chance for glitches in his implementation. He incorporates his extensive experience in his writings about new gadgets, tech stories, updates and innovations in technology, management tips, and inspiring app technology related information.