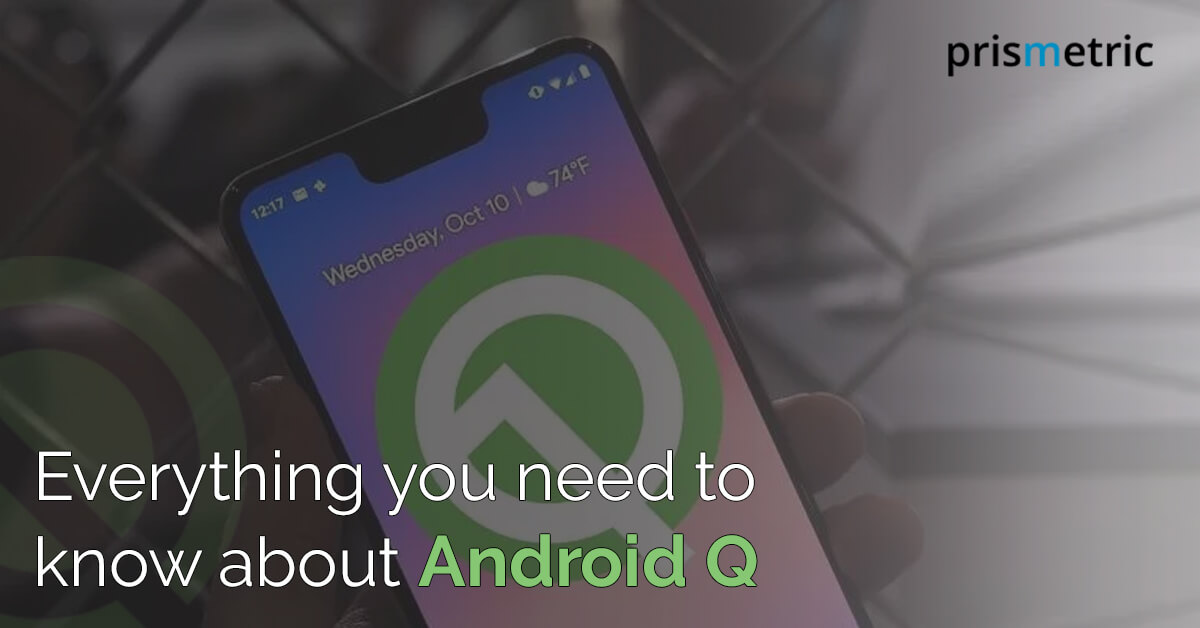 Android Q- the successor of Android 9 Pie released into the wild in different beta version in the series. Beta 1 and improved beta 2 version is launched in succession for the Android app developers to start experimenting with new features and enhancements. Finally, in Google I/O 2019 event, the beta 3 version made available to download on an increased range of devices and beta 4 is expected to land in the coming fall.

The string of updates and new features come with the Android Q seems as if Google has finished much finesse in the OS, which was started with Android Pie.

Let’s take a sneak peek inside at the most ambitious OS, which has brought a bunch of stuff on the table to try and adopt

The dark theme trend in Windows 10 that gets a lot of popularity is followed by MacOS and was most requested in Android. Considering the years of demand, Google confirmed the availability of dark theme system-wide that can be easily activated through the Quick setting menu.

The dark theme turns the screen to a true black color and helps the users to save the battery life. The new theme is available for first-party Android app, but for third-party apps, the APIs are under development to turn on or off the dark theme.

Live caption transcribes the media in the real-time

The new addition is the biggest catch of the latest Android OS release where real-time transcription of the what’s being said in a video call, podcast, or any other form of media is done. The live subtitles overlay on the top of the middle of the screen in the black box will be a great help to the people who are hard of hearing or deaf. Also, it works great when people are watching a video in public or volume is turned low in meetings.

Using local machine learning, the real-time transcription is done, which alleviates the need to send or store anything on the cloud and having a stable internet connection. This is why live captions appear on the screen with a lag of less than a couple of seconds. Unfortunately, the speech-to-text transcription is viable in English only, but in the future, the support for more languages is expected.

The digital wellbeing initiative was taken by Google last year to curb mobile addiction by providing a dashboard where people can see how much time they spent on different apps and set time limits on them. This year, it’s extended with new focus mode and integration of parental controls right into the OS.

Unlike previous Do Not Disturb mode, the focus mode allows the people to select a list of apps that they find diverting their attention or spending the most time on them, and then the selected apps will gray out, and the corresponding notifications will not appear. This way, people can proactively keep them out of the apps that distract or tempts them.

The family link app was already available on the Google play store that enables parents to link the device with kids’ device and control the time spent on different apps. In the latest update, downloading the app is no more required as the parents will find parental controls under the section of the settings.

To improve the app engagement right through notifications, the users are allowed to make a reply right from the notifications appearing on the lock screen. Now, the smart reply is added to incoming chats where the OS will make the recommendations for the ‘response to make’ after analyzing the message context. For instance, while driving when you get the message of restaurant table booking confirmation, the local AI assistant immediately opens up the Google maps to help you exact the restaurant location.

The other tweak comes to notification includes, swiping in the right direction will dismiss the notification and swiping left several pop-up options such as settings, snoozing, and more. Google has also planned to allow the users to change the notifications’ priority that appears on the lock screen, but that’s not announced yet.

Android’s security update adoption is severely less as opposed to iOS. For distributing the updates to more phones at speed, Google created a new Project Mainline feature, which has ended the perennial update problem with the elimination of intermediaries and security update distribution through Google play infrastructure.

The big shift to Android’s navigation comes with iPhone-style gestures where a long, thin white bar is placed at the bottom of the screen with distinct swipe gestures. The swipe up gesture takes the users to the home screen, swipe up from the home screen take users to the app drawer, and swiping across multi-tasking view allows the users to switch between apps. Also, the quality of animations is improved as compared to previous Android Pie.

Bid goodbye to the back button

Yes, bidding a farewell to the well-famous back button in Android Q is surprising for the users and developers as it’s considered as a navigation staple of Android phones.

In Android Q, when the users swipe in across the entire edge of the right or left side, a small “<” symbol will appear that indicate users want to perform back action. When the users swipe double on the symbol, they will be taken to the previous screen. The new standard expected to ensure consistency and predictability across all variants of Android Q devices.

The support for foldable phones and 5G network

As the foldable devices are taking a big leap forward in the Android ecosystem that works as both the phone and tablet (when it’s unfolded), the new Android Q is optimized to work on such devices with new updates. It’s ensured that screen continuity remains seamless as the user make the transition between phone and tablet screen, and pick up from the point where it’s left off.  The slew of changes to OnResume, onPause, and resizeable activity are made to enable android app developers to display the content on the various screen size smoothly.

As the world is looking towards faster speeds and low latency, the support for the 5G network is provided, and existing APIs is extended to unlock new experiences on the app and supercharge the existing features. With more devices supporting the 5G network, making the debut to the market, this update proves to be a boon for the Android ecosystem.

The feature was also in demand for the last few years and now become available in the Android Q OS. The built-in screen recording feature record a video of what’s going on the screen, in addition to voice-over and visual indicators that signals the taps on the screen. It works as a native recorder on the phones.

The security has always been a pain point of the Android OS, and Google is aggressively working on it to make the apps robust, secure, and device up-to-date with the latest security standards and fixes. The implementation of project mainline is a part of it, which we have already discussed before.

Besides, the biometric authentication framework is enhanced to support biometrics at a system level where support for passive authentications such as the face, eye retina, or fingerprint is included. The implicit and explicit authentication flows are also added.

The most significant improvement comes to privacy, and permission model is limiting the location access. Following the move taken by Apple, Google has allowed the users to disable the app to access the user’s location unless the app is not open and active on the screen. By turning off the location history settings, the app cannot access the user’s location, and if, the app attempt to access location, a notification will pop-up in the status bar saying it’s happening.

A new ‘Privacy’ section is added to the setting section where a dashboard to display and control data access, and a mix of different settings is included. There is a central hub to set of permissions for all the apps installed on the phone without needing to hunt them on the Google account settings. The permissions include the list of data types (Contacts, Calendar, location, or Microphone) whose access can be enabled or disabled by the users.

The most ambitious update of the long-awaited Android OS lives up to its much-created hype with the progress made on digital wellbeing, gestural navigation, security updates, and AI-enabled OS.  The year-on-year improvements that appear in the iterated OS update alongside the live caption, focus mode, and project mainline that steals the show are really beyond anyone’s guess. The long-anticipated dark theme, native screen recording, privacy setting update, and support for 5G network becomes available.

Google has nicely paired the plethora of changes with amazing features that make Android Q an outstanding OS to roll on the devices and try it out. Don’t hang fire! Get beta 3 update over-the-air on any pixel device and build an excellent app on the top of it.