How Much Does it Cost to Develop a Video Conferencing App like Zoom?

The year 2020 has brought many changes in our lives. The pandemic situation forced the world to think out of the box and adapt to the changes. One of the major after-effects of Covid19 was the rise of video conferencing apps. Previously utilized only by multinational companies having offices all across the world, today, the teleconferencing apps have found widespread adoption from even the small business owners.

Zoom is one of the apps that have found maximum users in the pandemic fuelled digital revolution. The teleconferencing app has bagged 2.5 million users since its inception.

The immense popularity of the app also stems from the fact that there was no easy to use and credible option to Zoom when the need arose. Now, there is a mad rush to build the next “Zoom” which has been expected to becoming the most popular video conferencing application. Nevertheless, many entrepreneurs are confused regarding the cost of building an app like Zoom. Many of them want to avoid the hidden costs of app development. Prismetric, a top mobile app development service provider, gets a lot of inquiries on how to build Zoom like application and what is the cost of it.

In this article, we shall shed some light on the topic and attempt to answer your queries.

Zoom is a cloud-based video conferencing app founded by ex-Cisco engineer Eric Yuan. The idea is to facilitate virtual meetings between people either in audio or video format. Zoom is compatible with various platforms like Mac, iOS, Windows, and Android. 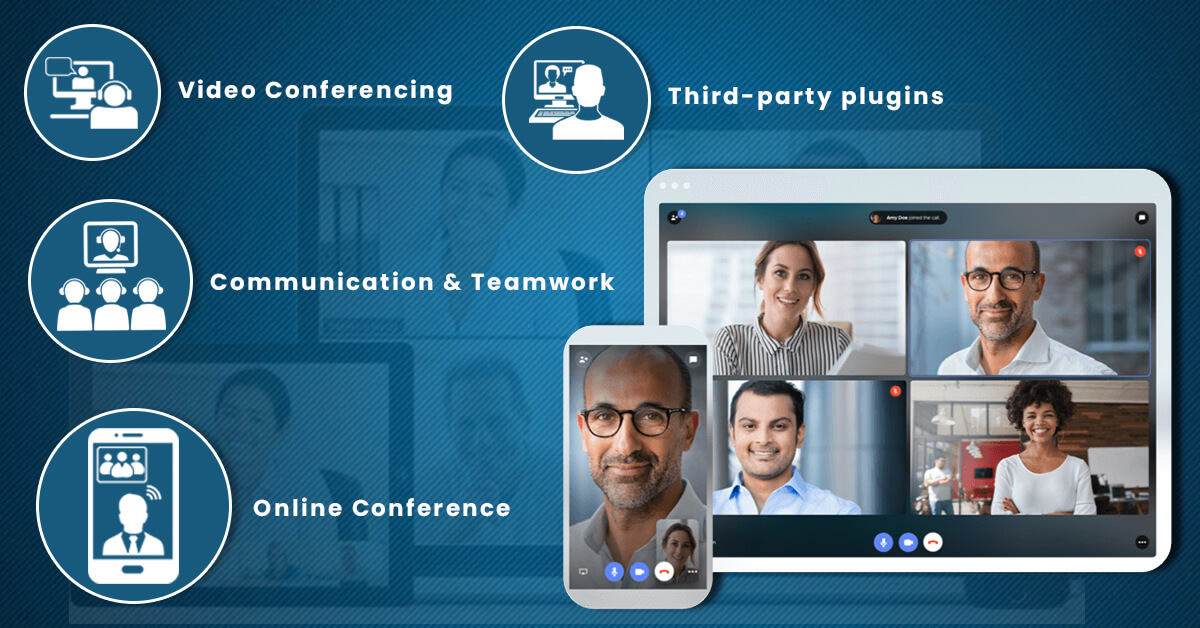 The hourly rate of the developers fluctuates according to the location of your developers. We have given below a rough estimate of the average per hour rate in US dollars for various locations.

If you are planning to build a video conferencing app like Zoom, then expect the budget to be around $45,000 to $70,000 in a developing nation like India. Also, note that Cross-platform app development can reduce costs as compared to native app development. We suggest you read our blog on how to narrow down your choice of platform for mobile app development in case you are facing a dilemma in choosing the correct platform.

Now that you are clear on the cost part, let’s have a look at the revenue part.

Do you wonder how Zoom makes money? It has a foolproof money-minting revenue model. 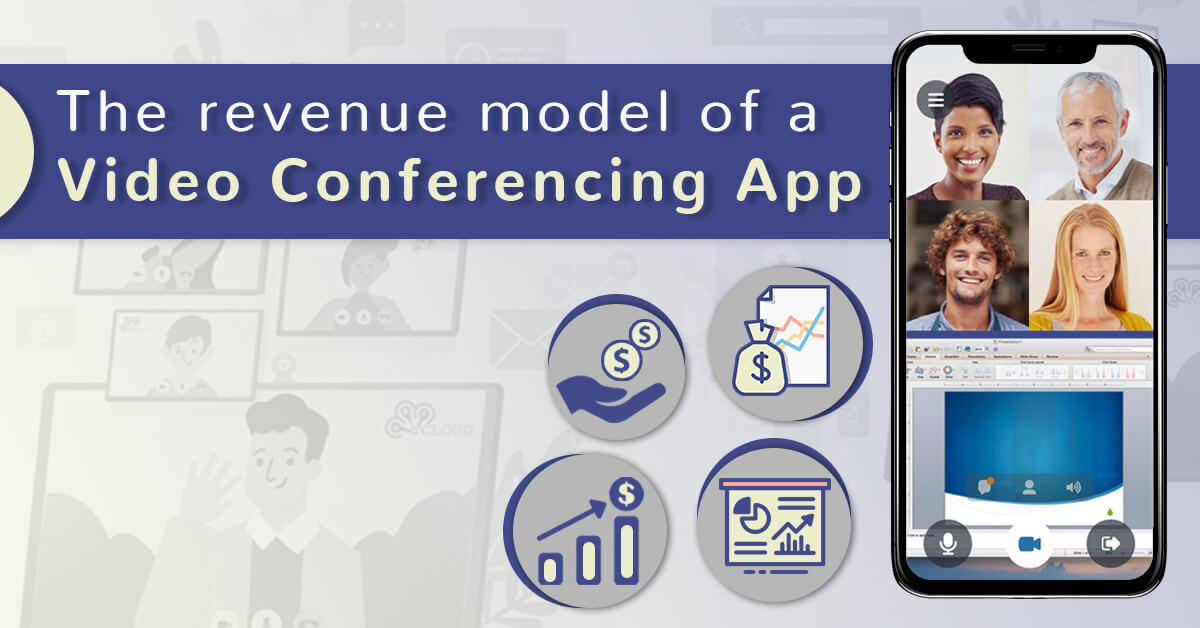 The revenue model of Zoom app

Zoom Meeting is the main feature of the app wherein it allows people to have remote video calls.

The app does not charge its users as long as the calls or meetings are conducted below 40 minutes. If the users want un-interrupted meetings that last beyond 40 minutes, then they will need to shell out $14.99/ month or $12.49 a month if they take the annual plan.

You can also build Zoom like application and derive similar revenue models. Such a type of revenue model is called the Freemium model.

Zoom charges a monthly fee (or an annual one depending upon the plan you choose) to the users. It also partners with hardware manufacturers to provide the required hardware support for these conference rooms.

Zoom phone is a feature designed for those users who do not want to have video calling; instead, they prefer a voice call. The tools for using the zoom phone feature are already available in the main product.

Zoom phones comes with a host of features like

Zoom has a monthly subscription model for this product.

For your group video calling app, you could consider including one of the above-mentioned revenue models. While thinking about revenue models, do not forget to control the hidden costs of app development. As they say, a penny saved is a penny earned.

Now that you have a basic idea about the business model of a teleconferencing app like Zoom, you should consider some basic features for such apps.

Features for a Video conferencing Application 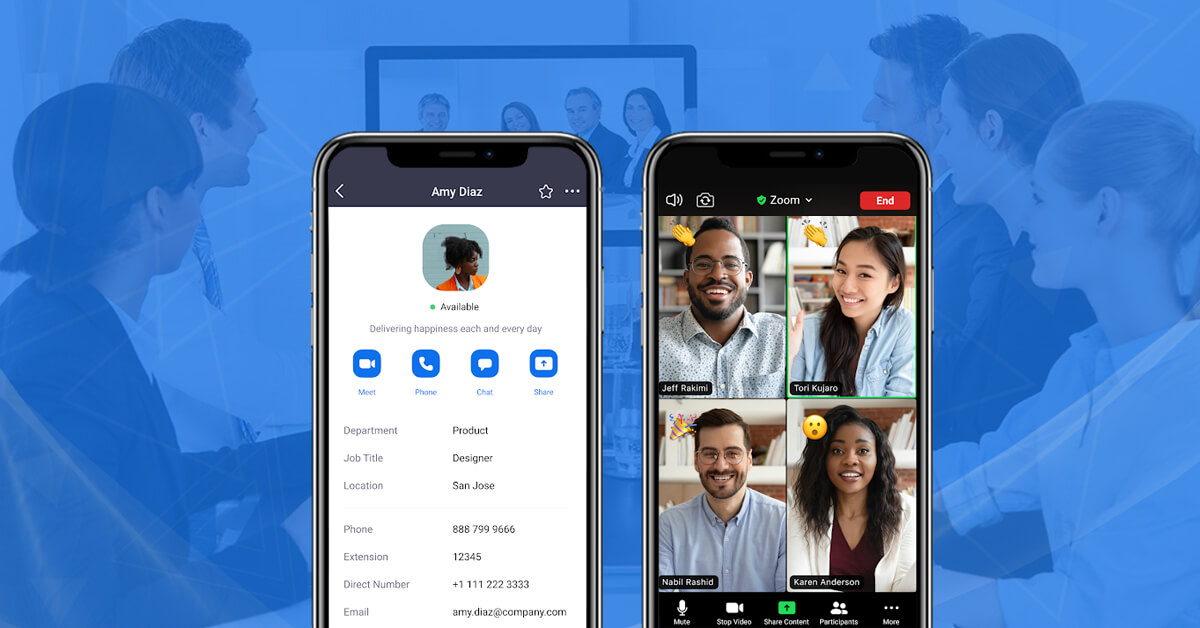 Once you are done with the basic features, you then need to have a look at the advanced features

Advanced features for a Video conferencing App like Zoom 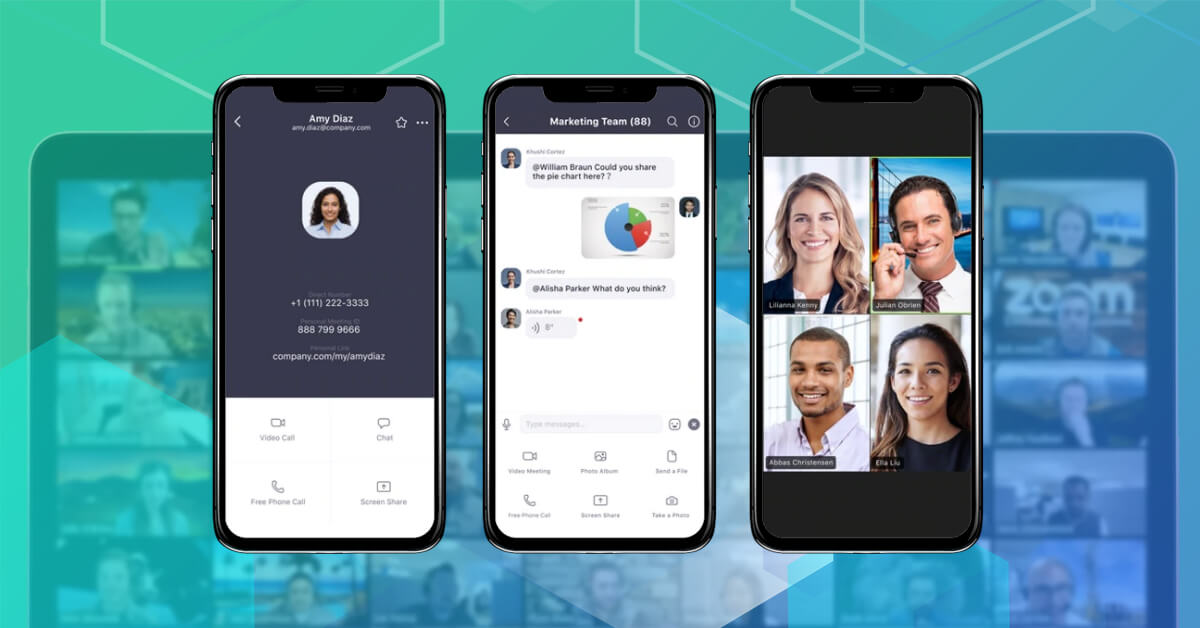 Auto-framing is a feature that eliminates the need for manual framing. If this feature isn’t present in a video conferencing application, then it would waste the time of the moderator in zooming in and out the video. The camera automatically adjusts the view to fit everyone in the group.

In a physical meeting, the focus is always on the host, lecturer, or speaker. You should be able to see and feel the body language or emotions to be in sync with the speaker. You can add this experience in your video conferencing app through a feature known as Speaker Tracking.

The VC systems can zoom in on the host actively tracking their body movements. This ensures that the focus is always on the speaker, engaging the audience.

Meetings and learning through video conferencing or tele calling requires the utmost attention. Noises such as people talking in the background, vehicular traffic, keyboard typing, kids crying disturb the environment. Noise reduction feature can help you keep all those distracting noises at bay when a meeting is underway. The unique quality of noise blocking technology identifies whether a real person is talking; if it does not find a real person, then it automatically mutes the microphone.

You can also use the acoustic fence technology to block unwanted noise.

The acoustic fence technology builds a virtual boundary around the meeting area through the use of microphones. This ensures that the sounds that are not within the “fence” are blocked.

In a case where the user is a large enterprise having multiple VC units, then this feature would come handy. The main idea about remote management is that it helps the user to change the settings without needing to walk physically from room to room.

The camera resolution matters a lot in a videoconferencing app as nobody wants a hazy distorted face. You should consider adding 4K support as most of the OEMs have launched products that support such an ultra-resolution for video conferencing.

We have seen it umpteen times that the users are unable to see a particular thing clearly because the video conferencing app does not have a zoom-in feature. You could provide optical and digital zoom features to your users to solve this issue.

We suggest you to imbibe the optical zoom feature in your video conferencing app as it provides a much clearer image and video quality.

You could save a lot of effort and hours of the speaker in video post-production by providing them a live video editing feature. You could provide special camera effects and quirks to make the video interesting.

This feature will allow the video conference host to display an image or a green screen in the background. By using captivating virtual background images, the speakers could make the experience more engaging.

Building a group video calling app like Zoom will require the following technology stack to make it scalable and rich in user experience.

UI/UX: Use tools like Google sketch and Photoshop to build that perfect UI/UX for your video conferencing app.

Coding:  Objective C, Kotlin, Java, and Swift are the languages that you can use to code a native app, while Flutter and React Native are the ones that you should use to build a hybrid app.

Data Analytics: Use data analytics solutions from Amazon, Google and Microsoft to gain actionable insights from the data of your customers

WebRTC: use third-party APIs like RTCPeer connection, RTCDatachannel and Mediastream to facilitate real-time communication via web as well as mobile devices 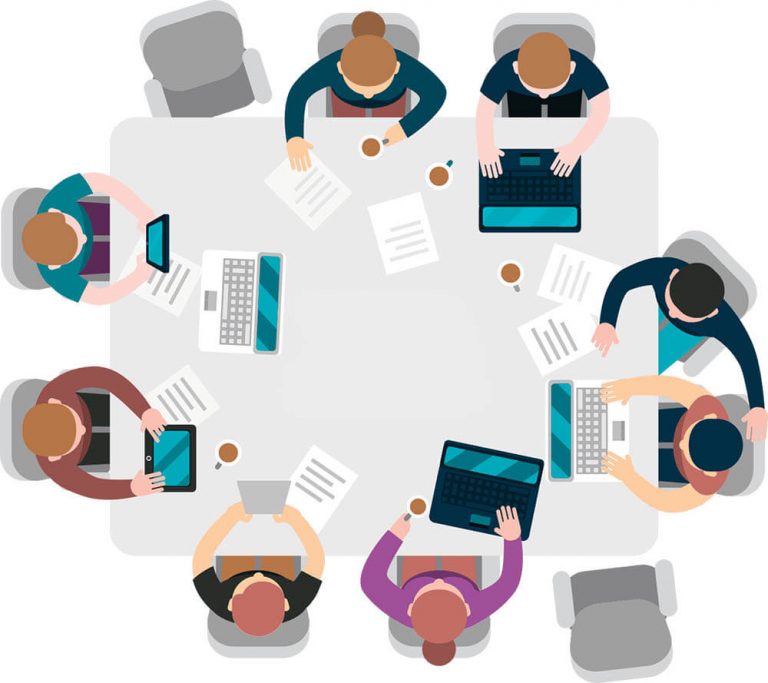 At Prismetric, we have been developing complex apps for 10 years now. We have a team known for taking up complex projects and meeting tight deadlines. We are a trusted expert mobile app service provider to a huge global clientele base from various industry verticals.

Video conferencing could be the next big thing in communications as people have understood the fact that it is way easier and cheaper to have a video conference over the internet than organize it in a conference hall at the office. The market size is big enough for Zoom’s competitors.

Hire proficient mobile app developers and the next unicorn in the space of video conferencing could be your app.