Android O: Preview of the Sweet from Google in 2017

The past several days has seen some unprecedented changes in the Android World as Google announced the next version of its ever popular Android series, Android O. There were many speculations about the changes in the specifications of the newest Android version, the first developers preview is released so that people could know what to expect from it. 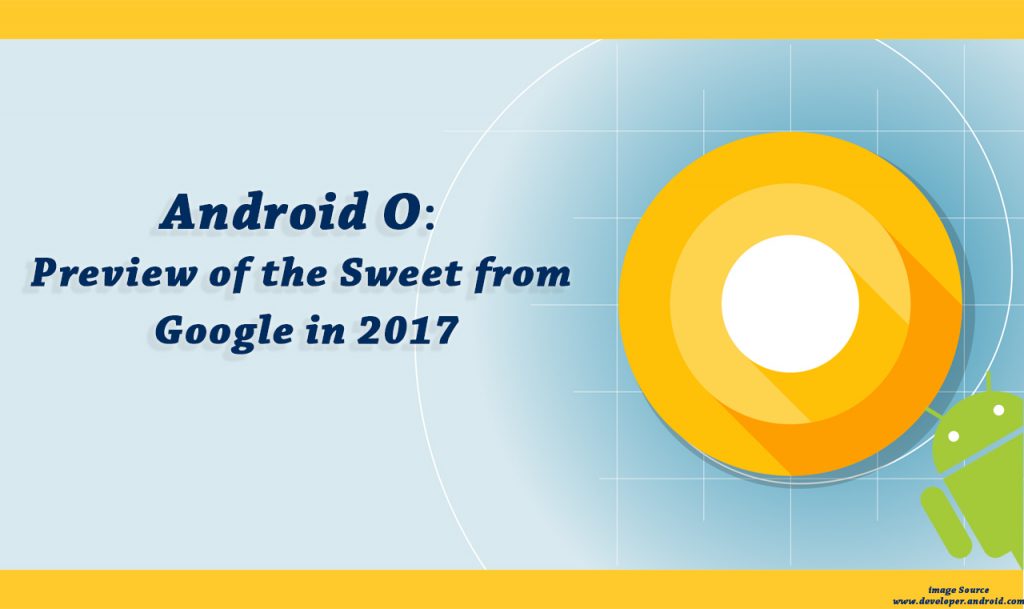 The beta version of Android O is open for the developers and according to sources from Google; the completed version is likely to fall later in 2017. At the developer’s summit Google I/O 2017, which is scheduled for mid-May, major updates and changes are expected in Android O.

The full name to the follow-up of Android Nougat is still not known, but it is tipped as Android Oreo by some of the leading tech websites. The first developers preview showed some exciting new stuff that will impact the developers in a big way through the apps that they are going to make. Be it the usage of customized fonts and icons or delivering professional level audio conferences, Android O is tipped to have it all.

New things on the Floor

Android O will have adaptive icons and amazing OEM shape masks to give the icons that extra effect. The unifying mask will allow the mobile app developers to integrate the existing app icon into a broader interface with a minimum efforts.

The most endearing inclusion is the Picture-In-Picture feature for video calling. Android O will provide a floating window that will help the user to shrink the video and work on other apps on the device. The beta version will also help the developers to specify the aspect ratio and also custom the video interactions i.e. pause or play.

Android O will also support a plethora of color profiles for apps. Google will offer a native way so that the developers can include a wide range of colors into their apps. The profiles will include editing, video applications and standardized imaging.

The Changes in the Interface

In Android Nougat, the icons could do nothing unless the user assigns a proper key code. But now with Android O, the UI tuner gets a new improved customized navigation bar. Thus, the UI tuner will allow adding new icons without even assigning the key codes.

The helpful by default shortcuts that were introduced in Marshmallow will be included in Android O through the system UI tuner.

The changed interface will also support the third-party calling apps so that the users can take their calls through messaging mobile apps like Whatsapp or Telegram. Also, to remove all the jitters related to complicated passwords in the mobile app, a new Auto-fill API will let the user fill all the passwords, addresses and other information.

The multi-window apps with Android O can be peeked or maximized according to the usage on the home screen. Taking the cue from Android Nougat, Google has improved the multi-window setup for Android O by enabling the users to view the app that they have minimized and maximized it as and when needed.

For customized alert in the notifications, Android O has added a ringtone option in which the user can choose any sound file from the file picker and make it the member of the sound picker list.

With such impeccable specifications and updates, Android O is all set to give the most comprehensive user experience to the Android smartphone users, even better than Android Nougat as it is perceived yet. Moreover, with the amazing updates, the mobile apps on Android O will be more user-friendly, intuitive and easier to use. In addition to this, the battery life is enhanced to provide you the power to help you go longer.

As was the case with Android Nougat, Android O developer preview also comes with the best in class evolutions, facilities and specifications. The features from the first look seem fully customized and user-friendly to the core. As Android is the most preferred and used mobile platform around the world, Google has taken care of almost everything with the latest version to woo the users.