With Android Nougat, Google is here with the 7th Generation of the ever improving mobile OS system. It was launched with much anticipation in the month of August as the new version had some of the most immaculate features a mobile OS platform could ever have. Nougat is not only the developer’s delight but the customer’s charm as well. The new features include multi-window mode, display size, direct notifications and bundled notifications. 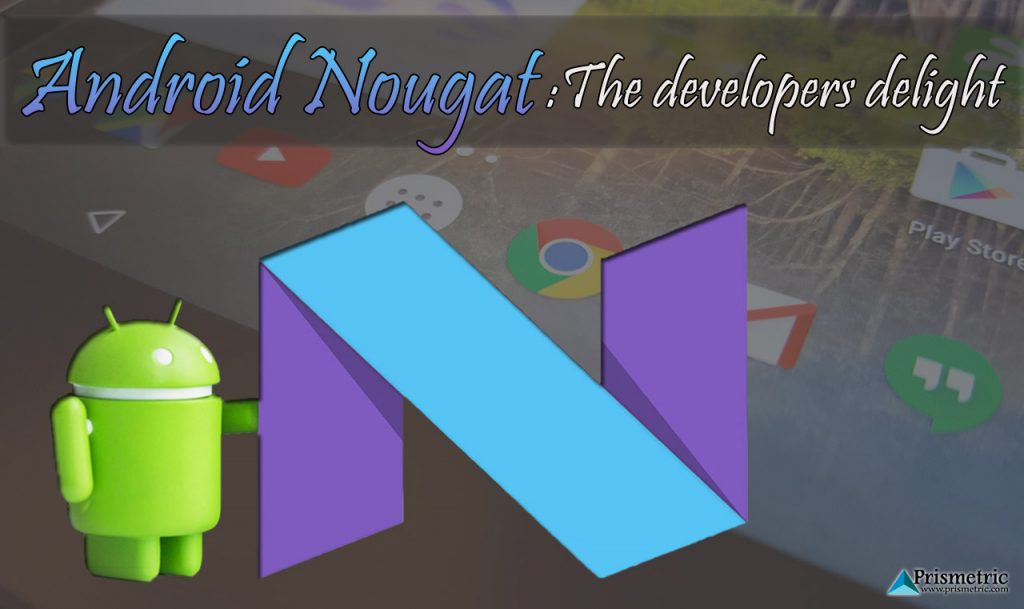 These features are known as OTA (over the air) features will not be available to all the users until the early part of next year. This may sound a bit weird to you, but in the astute reality, Android transformation is not a joke. Developers and all the people concerned or connected with it have to put their heart and soul into making the OS a magic for its users.

Speaking from an Android app developers‘ perspective Nougat has all the capabilities to be the best version Google has produced till date. Apart from the radiant specifications, it has all the things in which the developers can leave an impact or make their presence felt.

Let us have a deep insight into the things that would make Android Nougat the Developer’s delight.

Changes in the Demonstration

Android Nougat comes with a changed manifestation and it is advised to increase the target SDK version to reflect and use the adaptation of the new version. The increased SDK version will indicate that the app was already tested on Nougat.

The Android developers here have taken the utmost care regarding the changes in the adaptation and because of this; the compiled SDK version should be increased. The increased version will allow the developers to do all the code changes in order to adapt the particularity of Android Nougat.

From the perspective of Mobile app development, the change in the demonstration of Android Nougat will play an important role in amplifying the future of app development to a great extent.

JIT will enable the Android App developers to give profile guided compilation that results in superior performance and gains. Updates can be done at a much faster rate all thanks to Google’s extensive implementation and documentation. In addition to this, ART will help in compiling methods that will deliver the optimal performance and reduce the usage of RAM to keep the device away from heading. Moreover, power consumption can also be reduced to a very large extent.

Hold on Folks, there is a difference between Multi window Screen and split screen. Android Nougat gives the facility of native Multi Window support to make the process of using different apps simultaneously simple for the users. From the developers’ perspective, they can put an impact on the picture-in-picture and the ability to record video. Other than this, some containers contain scroll view, so with a split screen, it would be easily functional.

The Android App developers can also deal with the issue of a rotational screen with a multi-window facility as it can be restricted altogether in Nougat and the versions coming after this. The Split window is not just about the mobile devices, it will give a huge boost to the TV and Android Tablets as well. Also, the productivity of the apps will reach sky high with the split window as the users will have an ease to use them.

This function will automatically improve the storage of the device without compromising on the user experience and responsiveness. The Android app developers make sure that the process of implementation should be made straightforward, but in some cases, this mobile app development process takes some brainstorming and extra effort. The access to the storage is associated with the user credentials that is the username and the passwords.

This is by far the most powerful update under the hood. Vulkan API is the new, close-to-metal API for graphics processing unit. The GPU will reduce the power consumption while playing the 3D games and will enhance the overall performance. The adoption of this technique is bound to be a slow affair because here we are dealing with extremely complex graphics.

The API will give a superb performance on the multi-threaded processors as well as will be equally compatible with cross platform.

Android Nougat is bound to be the eye candy for the Android app developers as it comprehensively solves each of their issues while providing a better experience to the end-user. In addition to this, it performs the much-needed balancing act. Developers too are focusing on making the most of Android Nougat 7.0 till the upgraded version is released.