Inter-connectivity of IoT and Digitization: A step to the Future

Two of the biggest and most recent trends in the IT and computing sector are digitization and IoT (Internet of Things). Only a few people realize that these trends are deeply inter-connected and that the success of one trend relies greatly on the success of the other one. 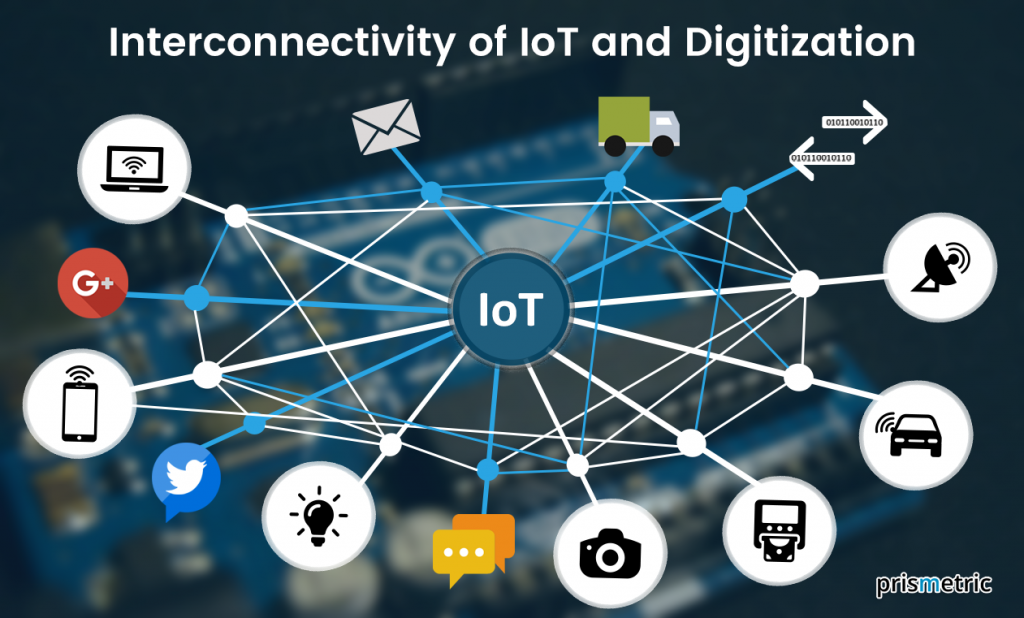 While digitization explores the concept of converting our daily life tasks in a digital format, IoT relies on the inter-connectivity of smart devices. If you can incorporate both these technologies into our environment, it is possible to increase the efficiency as well as the robustness of all the computer systems by several folds.

Recently, major countries like India and China openly declared several schemes to digitize the key socioeconomic factors that drive the countries. Let us have a look at how will digitization help in the growth of an IoT driven Utopian world.

Communication is an important aspect of our human lives. However, communication is no longer restricted to humans. With the advent of smart devices and computers, we can now  communicate with the businesses using technology. While programming languages do help in communicating with computers, they are not as efficient and as fast as verbal communication.

Digitization essentially helps in shortening the entire process of communication between humans and machines. Thereby, it allows us to give commands to a computer at a much faster rate. IoT largely focuses on how smart devices communicate with each other.

Computers understand only binary language. The Boolean means of language is not as diverse as emotional judgement of humans. While some people consider this fact to be a downside to using computers, some of them prefer using it more as in place of judgement scenario. Computers might outperform humans in making some decisions where speed is necessary, and you need to make the decision on a purely logical basis.

Since computers now use advanced forms of logical circuits, it is possible to create a diverse network of calculations to bring out the most optimized solution to a problem. The digitization trend will help the computer absorb a real-life scenario fast enough to give an output solely based on logical reasoning. The ability to take decisions of these devices will increase multiple folds in speed as well as accuracy by not factoring the emotional content negated by the digitization trend.

Therefore, these trends will work together to make a transparent network and logical structure of decisions that is easily traceable to its origin.

Digitization can efficiently convert all the existing papered documents into a digital format almost overnight. We already know that it is easier to manage as well as transport soft copies of documents compared to papered documents. You can easily send a soft copy via the internet anywhere in the world in a matter of seconds without any loss in quality of the content.

Apart from this, it is possible to store several thousand words worth documents in a very small storage space on a computer. The same amount of content, when papered, takes up a large space in someone’s office. The portability factor of transporting information and documents over the internet allows you to control a smart device from anywhere in the world.

Digitization will help in transportation of existing papered documents and save them in a convenient form for access shortly. This process will, in turn, help the growth of inter-connectivity between humans and smart devices (IoT) by opening more efficient channels of communication.

Automation is one of the biggest industrial sectors that will soon see an exponential rise in demand over the upcoming years. With automated industries and machines in place, it will decrease the time for research and development as well as the production of a new item. Automation relies on both digitization as well as IoT equally.

IoT helps in inter-connectivity of various computing and manufacturing devices in a production plant. Without the presence of an IoT network, you need a human workforce to control the machines thereby increasing the inefficiency of the entire model once again. Digitization, on the other hand, helps in reducing the entire cost structure of the automated industries that would otherwise be impractically costly.

You can consider education as one of the fastest growing business sectors all over the world. It is not only about educating our young ones for a bright future but is also a means of employment for millions of people around the world. The digitization trend will help in increasing the overall efficiency of transmission of knowledge. Since blackboards and markers are not the only means of transmitting knowledge anymore, students can communicate and learn via several digital modes and devices such as laptops, smartphones, tablets, etc.

When you establish IoT enabled devices in classrooms, you can easily transfer all the digital information from the central hub (the teacher’s computer) to all the students.

With the digitization trend growing fast, we will see mass employment opportunities in the IT sector while simultaneously putting people out of jobs in industrial sector due to automation. Digitization helps in speeding up the first stage of communication between man and machine, thereby reducing the overall time for the computer or a smart device to carry out the necessary function.

The rise of AI (Artificial Intelligence) has added the much needed fuel to get it running, and the way ahead is to start with this latest trending technology and avail the maximum benefits.