Humans have always been fascinated with the idea of future prediction. Across cultures and ages, this fascination hasn’t worn out. People diligently read daily horoscope predictions in newspapers and follow the advice. The charm of astrology has carried into the digital age and tech savvy individuals are shifting from humans to mobile apps for seeking guidance on their future.

Many techpreneurs are exploring the idea of building a mobile app for astrology as the future of the investment seems bright.

Why should you bother investing in building an astrology app? 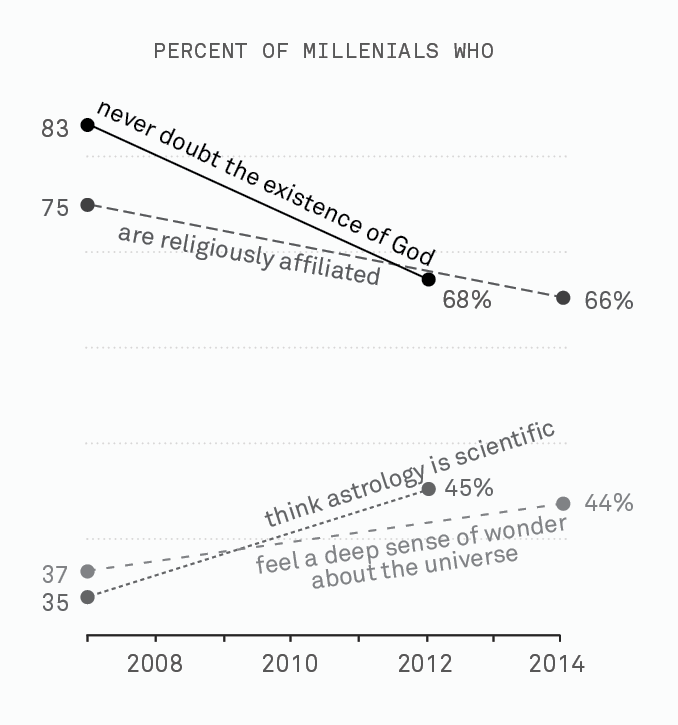 Science foundation reported that the number of young Americans opposed to the idea of astrology is low. In fact, it is so low that the foundation says that the comparable percentage of skeptics has not been so low since 1983.

As depicted in the above graph, the percentage of millennials who are interested in astrology and do not consider it as pseudoscience is increasing.

According to many, astrology relates well with the narcissistic personality of the millennials. But, if we look closer then astrology appeals to the basic human need of feeling special. Humans love it when something makes them feel unique and special whether it’s a brand or astrology. As Mr. Birnbaum, one of the investors in Sanctuary puts it,

“What’s better than something that is basically a story about you?”

All the startups know that anything that appeals to the millennials is good investment. This is because the millennials are the most prized customer segment for any business as they are a population group that has a growing income. Also, according to a research, the millennials are expected to inherit some $68 trillion worth of wealth from their preceding generation. Thus millennial participation in an app makes it investment grade.

Venture capital is investing in astrology

Take an example of Co-star, an AI powered astrology app that delivers quirky one liner to the users on a daily basis. Started in 2017 by Banu Guler, Ben Weitzman, and Anna Kopp, the astrology startup has already 3 million+ downloads and more than 400K followers on Instagram. The success of Co-star has attracted $5 million in funding from Maveron and Aspect Ventures who happen to be successful Silicon Valley venture capitalist firms.

Banu Guler, the co-founder faced many rejections from investors regarding the app. But she understood her customers very well as she states, “I get that you’re not into astrology,” but if you had access to a 20-something or teenager who is a girl, that’s who you need to talk to.” Also, there is a “scientific touch” to astrology with Co-star as the company claims to use NASA data to track the movement of stars.

Although the app in itself is free it makes money by charging users to compare their chart to that of a friend. It answers questions like, why did the two of you start fighting? Or can you two be soul mates?

According to Anarghya Vardhana, a partner at Maveron Co-star has the potential to become as big as Tinder or Spotify.

According to investors like Ms Vardhana, people are seeking smaller and more specialized communities online where they can feel connected. Astrology applications help in removing the feeling of loneliness that the people of the world feel today. 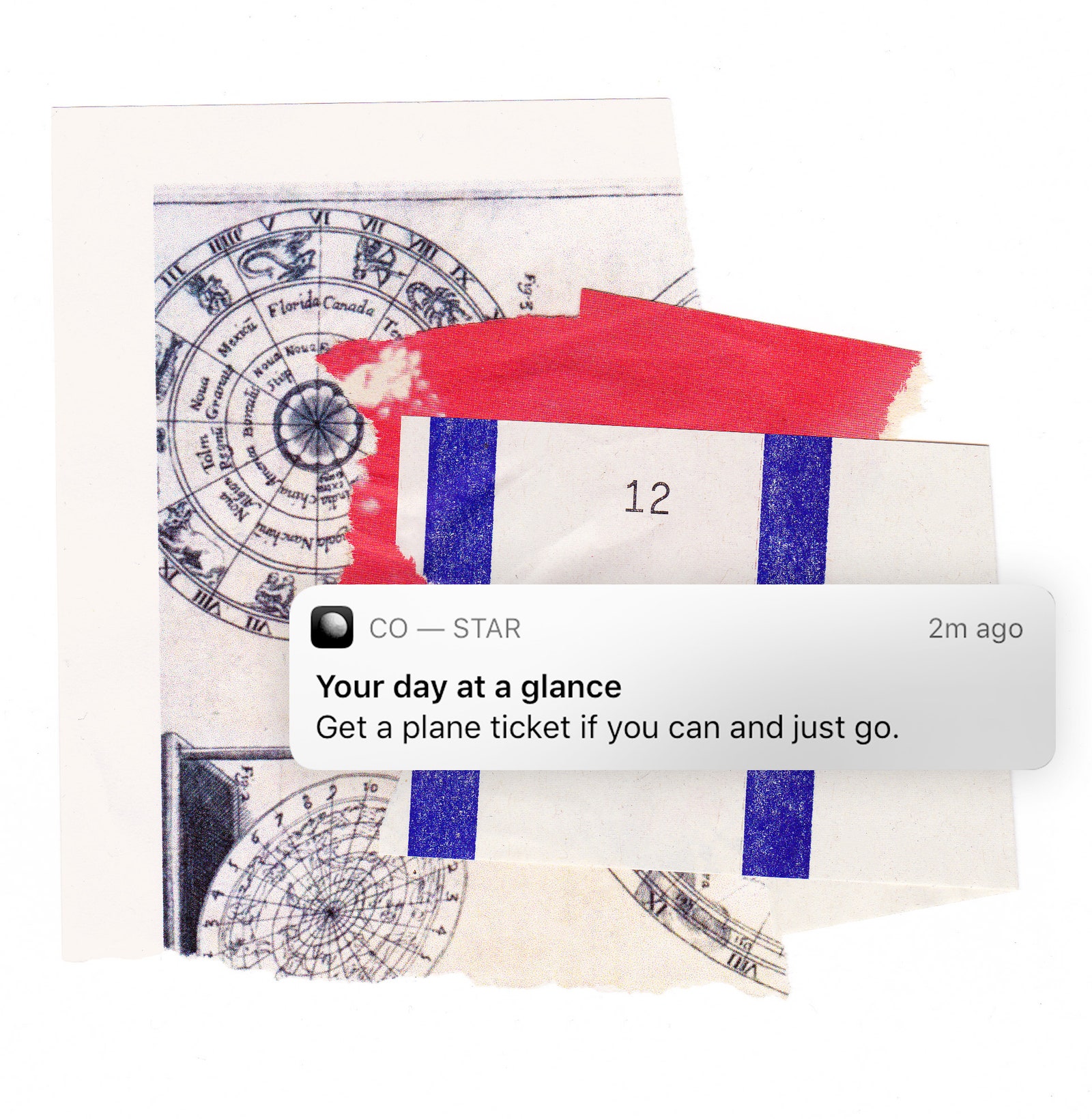 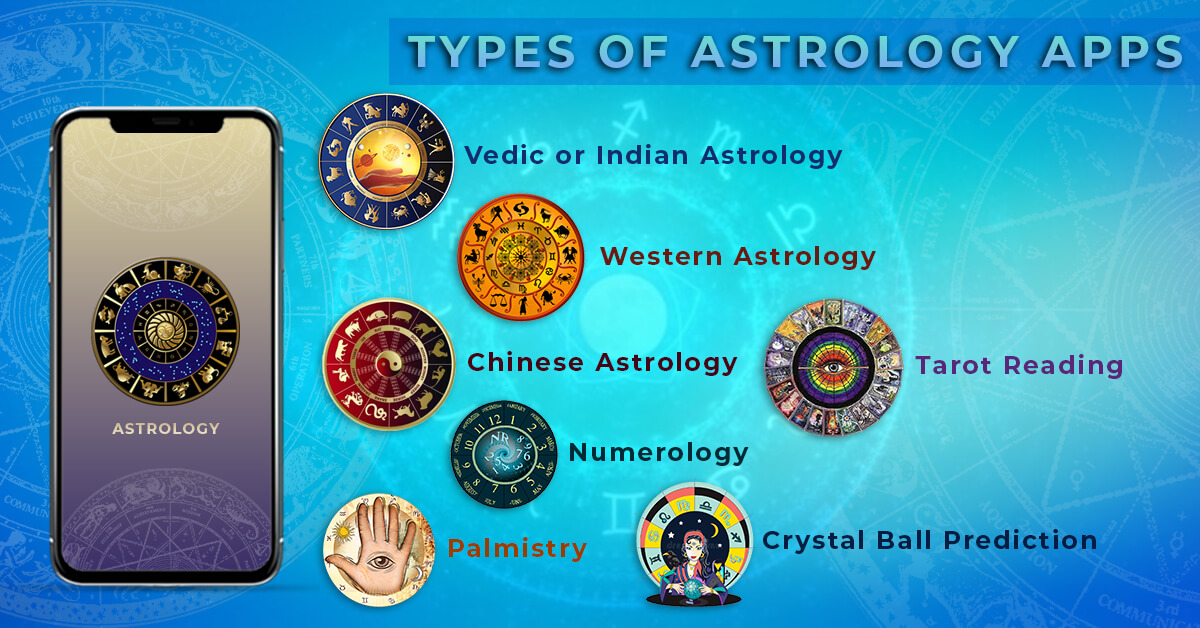 In astrology, there are various belief systems across cultures. Mentioned below are the few popular ones.

Based on their birth year, it broadly classifies people into 12 animal signs like tiger, monkey, cock etc. It follows the lunar calendar and the 12 year cycle on which the animals are named is concurrent with the revolution period of the planet Jupiter around the Sun. The system determines the future by conducting calculations of the positions of 5 important planets, moon, Sun and various comets at the time of a person’s birth.

Palmistry is concerned with prediction of future by reading the lines and marks on a person’s hand, forehead and even feet. Also known as chiromancy, the practice is popular in many cultures across the world.

Crystal ball gazing has been around for centuries in various cultures wherein the gazers take the aid of crystal balls for entering into a meditative state.

By including all the widely practiced forms of astrology in the app, a company can ensure that the app has something for all. Also, it adds to the variety of the app. 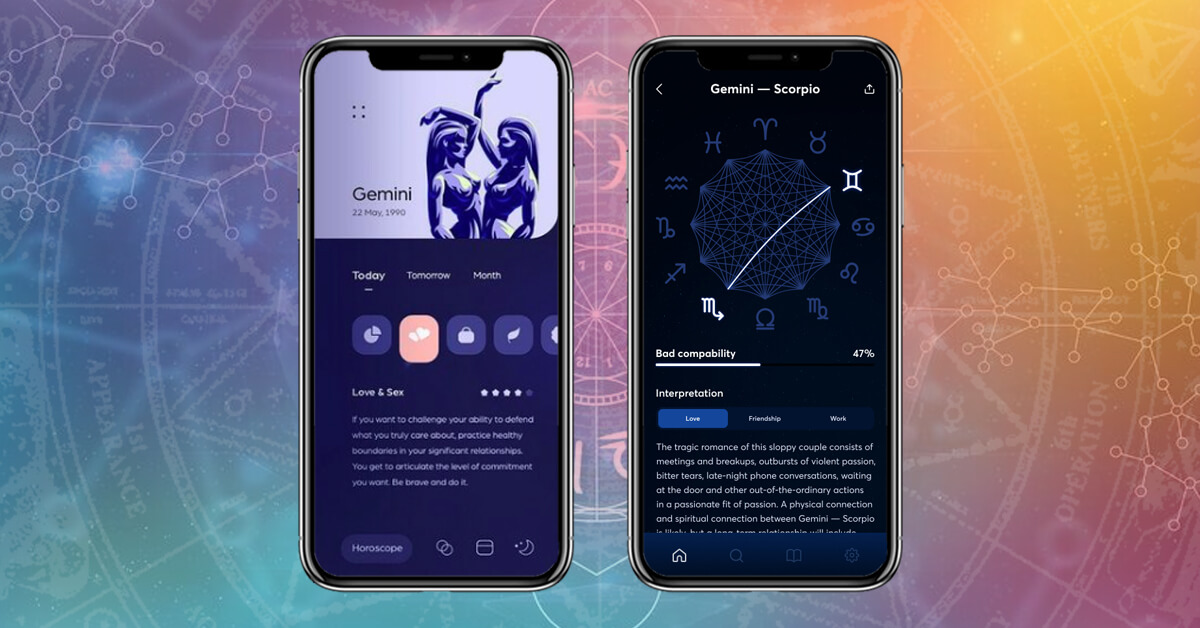 Listed below are some basic features that can be included in an astrology app.

An astrology app can include a basic horoscope report containing the major details like important time to be cautious about positive traits, friendly aspects and other related things.

A daily reading includes daily forecasting. It would make a perfect addition for people with a habit of beginning their day with daily horoscope readings.

The experts provide a forecast for the entire week with some details about the positive days and how they can make the most of week.

Just like daily and weekly reading, monthly reading is also possible that forecasts person’s monthly happenings in their personal and professional lives.

At the end of the year or local year’s beginning (for instance, Chinese new year), the local astrologers predict zodiac signs’ future for the forthcoming year.

The forecast of a personal affair and their love relationship can be included in love readings. There are many couples who firmly believe in love forecast depending on which they behave or act with their partners.

While those in love read ‘romantic’ notes, business minded persons prefer reading their forecast for businesses and money. Depending on the zodiac signs, each person would have different luck in their money games. A lot of people believe in their financial forecasting based on zodiac signs.

Daily tip include general forecast for each zodiac sign including which color of attire they should wear and so on. Based on the daily tip, people follow their 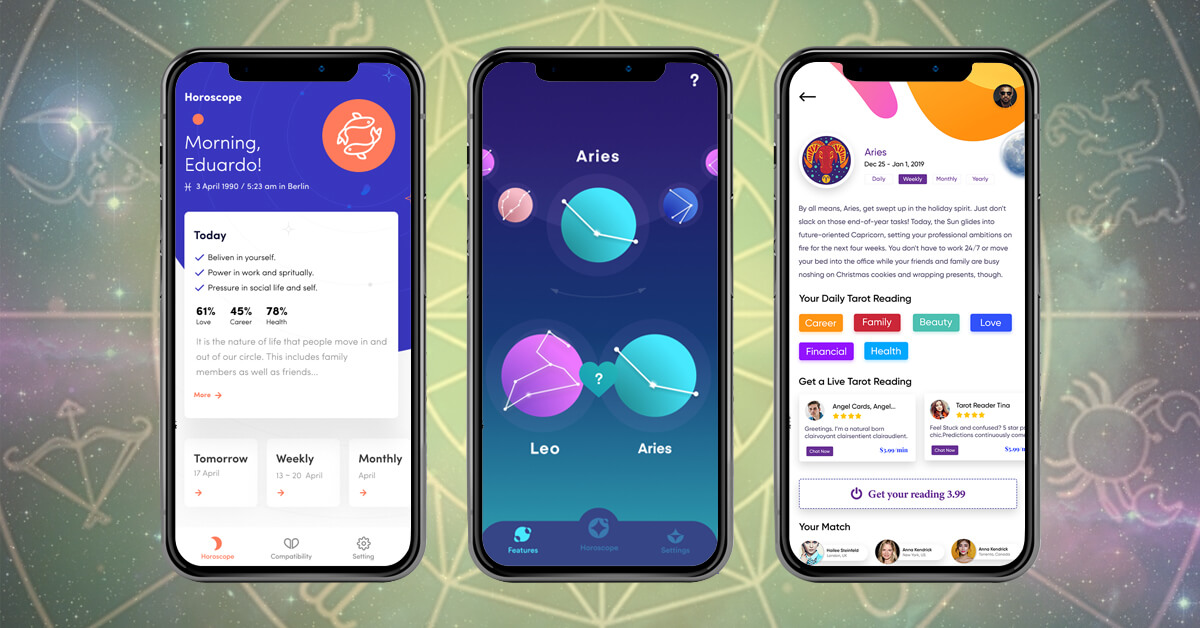 A company going for Jyotish app development can consider sending personalized push notifications to its users using the power of AI. The popularity of Co-star’s AI based daily notifications is proof of this fact. Once the user enters their birth details like time, data and place of birth, the app calculates the birth chart of the user and also collects data regarding the picture of the sky when the user was born. After doing the astrological calculations, the app gives detailed predictions as the output.

The daily AI-based horoscope notifications will help in drawing the user to the other features of the app. This way, the app will keep the users engaged with it and help in increasing the revenues of the app.

While it is possible today to use the power of AI, machine learning and advanced predictive algorithms in astrology, the fact remains that nothing beats a good old fashioned personalized reading.

The app should have a feature where the users can chat with the astrologers or call them to get more customized recommendations.

Take the example of Sanctuary; the app collaborates with astrologers, providing on-demand astrology services to its users. While the basic stuff is free, the users have to dole out a small fee to chat with the astrologers. Astrology is a more personal thing and however sophisticated AI algorithms get, they just can’t replace humans.

The feature would not only serve as an additional revenue stream but also help in engaging the users with the app on a much deeper level.

Dating based on horoscope

The age old belief that some people will get along with each other better based on their sun signs has entered the digital domain. Align is a dating app based on astrology. The app uses a unique mix of astrologithm (astrology plus algorithm) to help its users connect with their “match made in heaven”.

The idea is that the energy of two compatible sun signs will match and the two persons will be happier together. The app gives an idea about how a date might go using the power of astrology. The feature helps the user in understanding how the user relates to all signs and does not bind the user to a particular sun sign for matchmaking purposes. For instance, the app says that Leos can match with all the sun signs, provided that their partners give them enough attention. The horoscope app development companies can cash in on the matchmaking feature of the app. 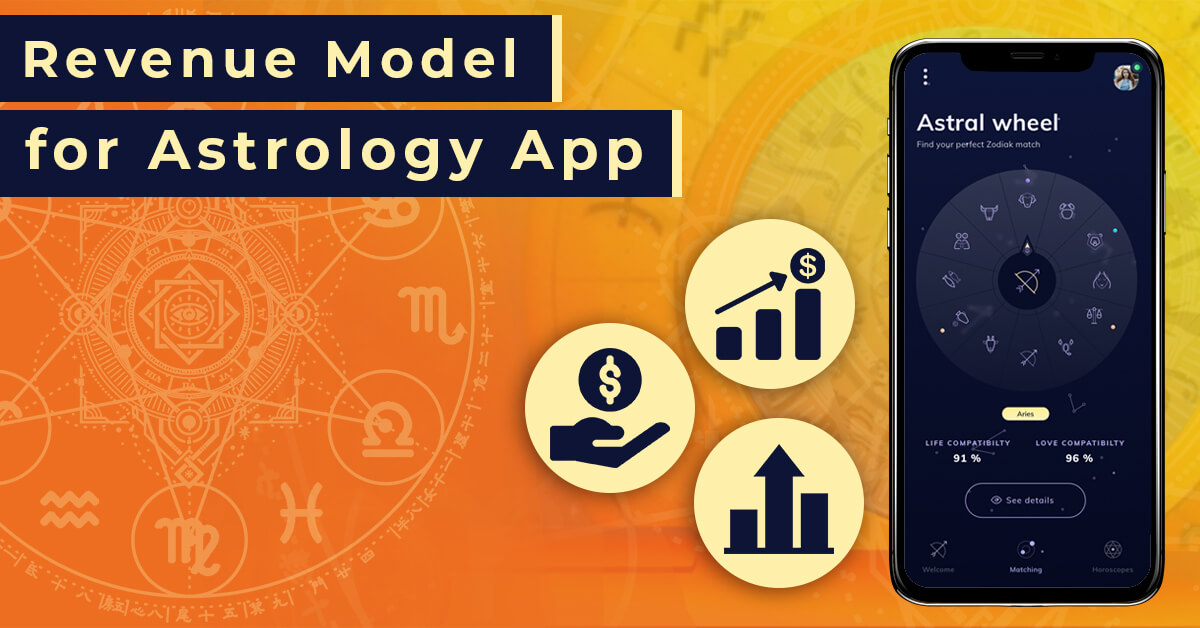 Startups like Astrotalk are providing astrology solutions to their customers by connecting them with the astrologers. The marketplace model allows an astrology startup to gain revenue from the astrology consultation seekers as well as from astrologers who are looking for customers.

The astrology ecosystem comprises many services and products. Astrologers offering personalized readings, Gemstone sellers, Feng Shui and Vastu Shastra sellers are some of the businesses who will be interested in partnering with an astrology app to sell their products and services.

Advertisements of related products can prove to be a major source of revenue for an astrology app. An astrology app can put up advertisements related to books on astrology, gemstones and other merchandise, personal counseling sessions with astrology service providers and so on.

An astrology app offers an opportunity to sell merchandise directly to the customers. The app can sell everything from gemstones, books on astrology, detailed predictions and things related to Feng Shui and Vastu Shastra. The astrology app can double up as an astrology ecommerce store.

Cost of building an astrology app

The cost depends upon a few critical factors. Here are a few to list.

A simple daily horoscope prediction app based on sun signs will cost less as the predictions will be more general. A more personalized app with AI based data screening that takes its data from NASA satellites like Co-star will cost much more. The more features, the higher the cost.

App developers in developing nations like India are around 2.5-3 times cheaper than the developers in the western world. Outsourcing astrology or horoscope mobile app development to countries like India would be quite affordable.

The cost of developing an astrology app can range between $10,000- 45,000 depending upon the number and complexity of the features and on the location of the app developers.

You have a bright future

The interest in astrology is age old and an astrology app can prove to be the perfect medium to connect the tech-savvy millennials with the tradition. An astrology app ticks all the checkboxes as it hinges on an already popular idea, the venture capitalists are starting to look at astrology as a viable option and the competition is less. A company choosing to develop an app for astrology stands a very real chance to make good money out of it.