“Change is a good thing, perhaps the best thing and no good thing ever die”. Don’t worry folks!! I have just replaced ‘Hope’ with ‘change’ in the famous dialogue from the movie Shawshank Redemption to show the relevancy. We all know that change is an inevitable thing and more often than not, change in the technical front has been mainly for the good and betterment of the human society. 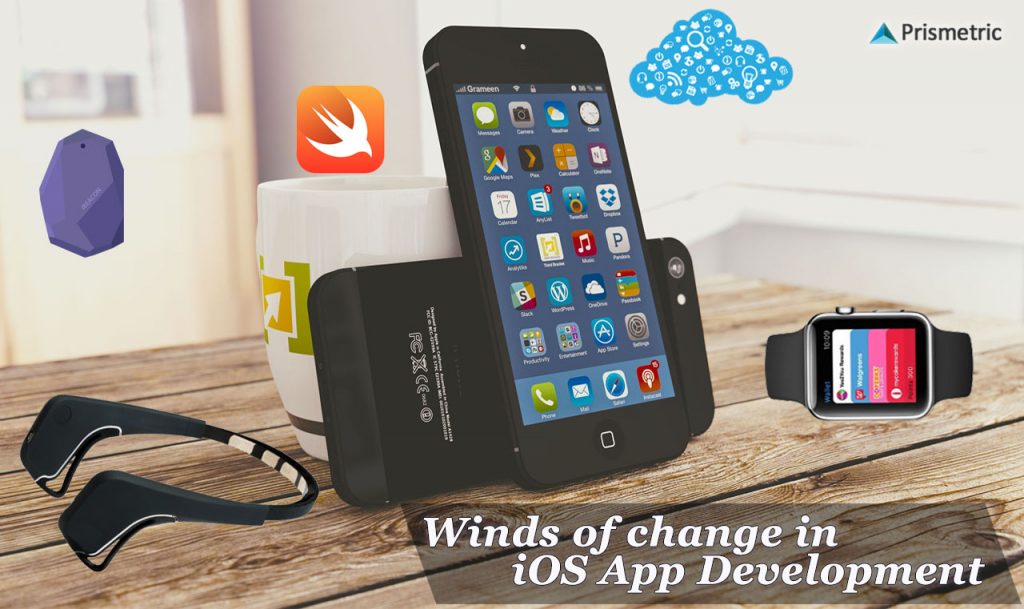 As far as mobile app development is concerned, the technology evolution has taken it to the next level and has made it, i.e. the mobile apps, a household name. iOS being a leading mobile OS platform has a major role to play for iPhone app development. It is probably on a highway ride to compete with Android and there are some factors that need attention.

Android mobile OS platform is the fastest growing as most of the companies are outsourcing it to leverage the full benefits. Therefore iOS has to step up the baton to remain in the scheme of the things for their own benefit.

Therefore, let us look at the changing trends that will keep iOS floating amidst this stiff competition and also keep them at the helm of mobile app development.

We all are aware of the fact that until now, Objective-C was the mainstay for iOS app development. Swift broke into the coding scene last year with a radically new arrangement of coding strategies and had more comprehensive and authentic foundations. It has a cutting edge compiler framework that allows the mobile app developers to contrive and create dependable codes using the Xcode devices.

As Swift is an open source programming language, the app developers off late have distanced them from Objective-C and are enthusiastically using Swift. The biggest reason behind is that it is easy to navigate and can be creatively used to develop advanced applications. In the present year, Swift 3.0 will extend and develop apps for iOS, wearables and tvOS.

Cloud computing or the cloud-based applications have become a hot topic in the world of mobile app development as it creates a win-win situation for both the app developers and the users. Cloud technology is all set to be dominant in the marketplace due to its capability to sync with multi gadgets. Moreover, through the Cloud support, the developers will not require any major application measures and can go about their work with ease. This will also help the app users to access the mobile apps across multiple devices and will provide smart sync using Cloud.

Watch OS2 was perhaps the biggest app release of 2016. The advancement in technology in the wearable by Apple will push the application market especially the wearables and take it to a whole new level. It will create new opportunities for iOS app developers and will allow them to experiment in order to find new success. Considering the fact that wearables will have a huge pool of chances for application development, it will rope in new companies and they will also come up with innovative ideas for the same. As the wearables are considered the “Technology of the future”, this industry is taking huge steps and is still expecting a huge growth, thus Watch OS2 has a brighter road ahead.

Customer tracking is important for most of the businesses, especially for the ones who are involved in mobile marketing and want to seize the location of their mobile app users. iBeacon will allow the companies to personalize their services and give their customers a better user experience. The geolocation facility will help the companies to track their customers with ease and utmost precision.

It is a known fact that Apple’s iPad tablets are popular and are prominently used by the enterprises. IoT technologies will make this aspect more sophisticated and increasingly reliable. With IoT, the data will be kept in an organized manner so that it can be used as and when needed. It will also enhance the process of developing smart homes and offices as the IoT application development will have all the things connected and the user can use them according to the need.

Mobile commerce is growing exponentially. Technologies such as mobile wallets and beacons will enable the mobile users to get more apt to the purchasing process and will make the checkout and payment process simpler and more secure. iOS app development will target providing enhanced and immersive mCommerce apps on their platform so that it would attract more and more users towards it as the development of mobile technology has changed the way people shop nowadays.

The future trend in iOS mobile app development will see gaming and other non-commercial apps getting free along with the eCommerce apps. App developers will depend more on advertising within the app instead of costing a fortune and losing genuine users. A report by Gartner predicted that over 90% of the mobile apps will be free by the end of the year 2016. This trend is likely to continue in the coming year as well as the apps will feature a fully secured purchase mechanism.

We have seen some of the changing trends and there are still some amazing changes to be seen. The coming technologies will be a skill update for even the developers as all the above-mentioned areas will give them new aspects to try. With iOS 10, iPhone 7 and 7 plus already in the market, iOS has made a strong statement about their mobile OS and app development process and are working efficiently to remain at the top of their realm.