The 46th edition of Weekly Analytics from Prismetric brings a closure to the fifth month of the year 2017 as the mobile world is brimming with oodles of confidence. Like every week, this week was no different from the previous weeks as fields like Android, Google I/O, mobile technology, marketing, IoT, mobile games. 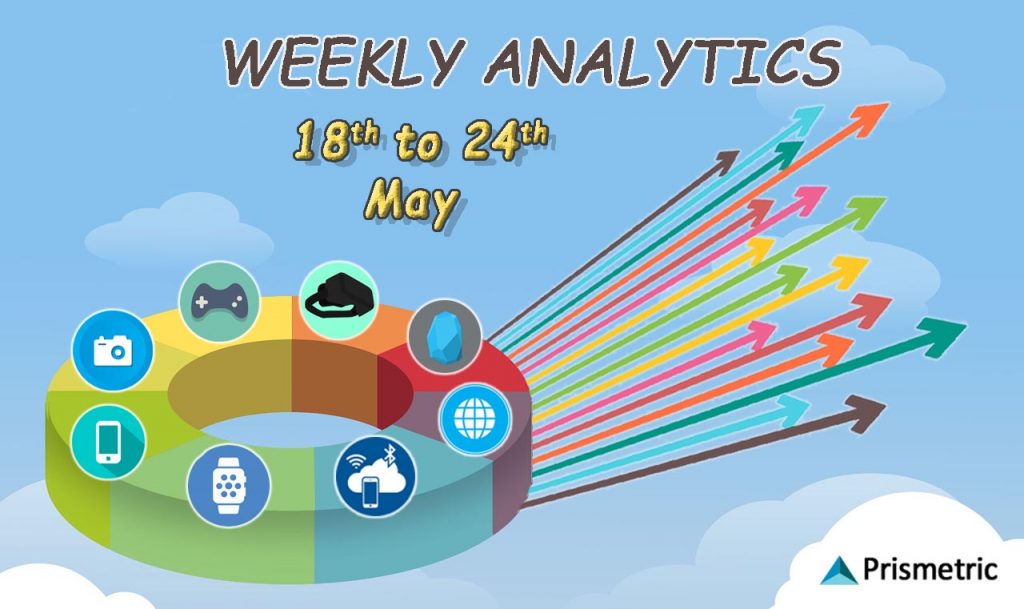 The biggest thing that rolled over the tech arena last week was Google’s I/O 2017 that got concluded on 19th of May. As anticipated by many tech pundits, Google concentrated more on providing this for the app developers rather going overboard for media hype and attention.
Moving over Google I/O, let us look at the other substantial things that paved way for new technologies and kept the mobile tech world going.

Whenever we talk about the future of technology, the process of monetization isn’t the first thing that strikes our mind in the first instance. The same process goes for mobile gaming’s monetization process, but it is essential for the survival of the mobile game as well as the developers. Determining the importance of data as it is a key asset is necessary for game monetization.

Augmented Reality was the “Pie to everyone’s eye” at the Global event of I/O 2017 as the tech giant showed a plethora of practical application related to AR. It was not just for entertainment purpose, ad Google looked adamant enough to uncover to all the relative things. The proliferation of AR technology was ubiquitous as Google showed how the different technologies can rely on it.

Yes, folks, it is true. I know it is hard to digest, but in reality, Android has beaten iOS in terms of mobile app performance. According to researches, iOS apps have the tendency to crash 3 times more than that of Android (that’s quite shocking in itself!). The study also revealed that the latest iPhones have 10 percent higher failure rate as compared to their predecessors, which is not the case when seen in Android.

It is not surprising to see Bengaluru has emerged as a prime destination for the IoT things among all the other cities of India. Stats show that the city accounts 52% of the total startups in the country followed by Delhi, Mumbai and Hyderabad. Moreover, the IoT ecosystem in India is oozing as it has an 80% increase in total after 2010.

As all the major sectors in the business area are going through the major digital transformation, it is fair enough for the Finance industry to also get along. Integrating mobile technology will be a game-changer for it and will also provide a plethora of options. The cashless payments options have been instrumental in bringing in new customer and also retaining the old one due to the intuitive technology. It also reduces the element of risk in money transition and also increases the security level.

We all have suffered from the pain of looking at the same ad again and again for number of times while surfing through our smartphones or desktops. To counter this, Google’s unique reach will measure the amount of the same add shown to people and thus will capture the unique users with average impressions. This will ultimately lead to higher and efficient conversions.

A Foolproof Way to Business Automation