“Optimism lies in the eyes of the creator who has the capability to change the world”, the famous quote related to creators and people who have changed the world around us amazingly. In the realm of mobile app development too, the past week has been very prolific and so have included some of the important news to our weekly analytics. We have seen some major developments in fields like Mobile apps, Mobile Marketing, Chatbots, Artificial Intelligence, Android, FB for developers and the changing shapes of mobile apps. 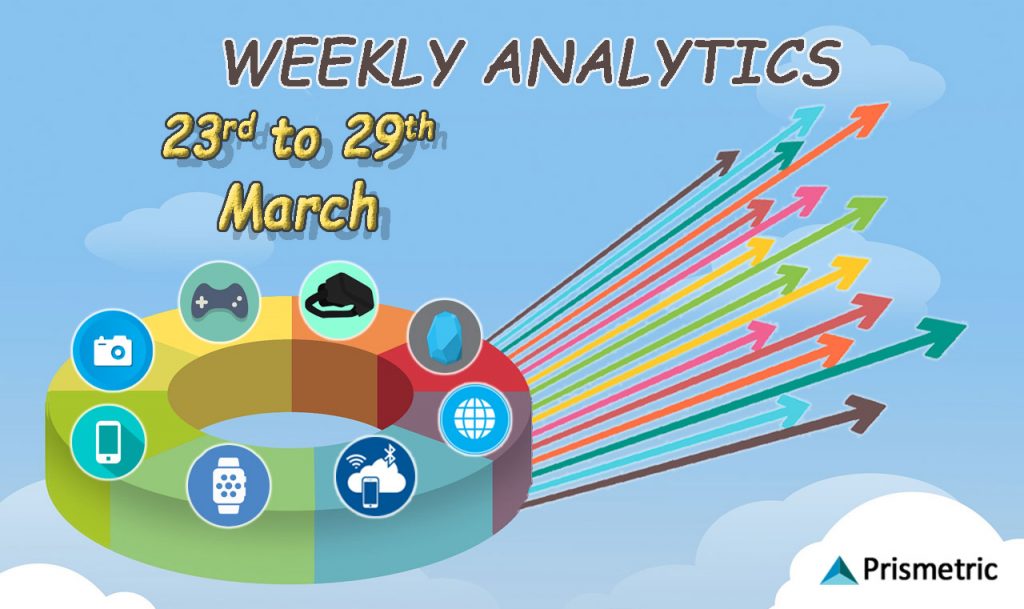 Also, researchers showed that in the coming decade, Smart lights and bulbs will hoard the maximum part in the IoT devices. The major reason behind this is the urge of smart homes with smart appliances and devices. IoT could see a major upward escalation in the recent future as many organizations and companies have realized it potential and working ardently in that direction.
Therefore, let us dug in deep and find out the essence of the above-mentioned fields regarding technology advancement and service providing methods.

Appstore Revenue: Android to pip iOS in this year’s revenue

It is expected that Apple will lose its lead over Android in the matter of revenue generation this year. According to reports from AppAnnie, the cumulative revenue from Google Play store and the third party sources will overtake iOS’s total revenue and is expected to maintain the lead till the year 2021. Moreover, the report says the gross spend on app downloads will be 352 billion in 2021.

Mobile Gaming: Super Mario expands to Android and rolls out version for iOS

As per the original announcement, Super Mario arrived a day earlier to the Android devices and for iOS, it has updated itself to a new version. Before making its way to Android, Super Mario ran exclusively on iOS devices and brought over 78 million downloads. The company also revealed that over 5% of the mobile game players purchase the game which brought in a revenue of 53 million for the organization.

The newest edition by Apple i.e. iOS 10.3 is here in the beta version and already has some amazing features. It will include updated specifications such as iCloud Calls, Siri, Car Play and MyiPhone. The enhanced version will allow the users to make calls through iCloud using Wi-Fi. This means that an actual smartphone is not required to make the calls as it can be done easily through iClouds.

Google Search: The Search Engine will include Gboard, 3D touch

Google with a thought of making its search engine more powerful and deeply integrated has introduced new features such as Gboard, widget and 3D touch. With the new improvements, Google is looking to enhance the viewership and the search experience of its users so that they can get more authentic answers to their queries. Especially the Gboard app will contain a variety of tools and support typing and voice transcription.

The evolutions of mobile apps have made them a houseful name and have made them essential in everyday’s work. Out of all the mobile platforms, Android is the most used and has the most prolific and widespread customer base. Therefore it becomes essential for the designers to design the subtle and prolific app so that the customers would not have any problems in using them.

Mobile Apps: The myths that will hurt your Business

With the mobile app industries establishing it as the front runners, there are many myths surrounding them. For example, it is widely believed that the app store is only for big publishers and the newbies have no chance in it. The big daddy will dominate the majority of the app store and will not give any chance to the novice companies.

Micro Apps: Knowledge about the micro-apps

A micro-app is a thing which you are using but are not aware of it. The simple definition of a micro-app can be an app that allows the users to perform a specific function with ease. It has a single particular functionality and also solves a precise problem with satisfaction for the user.