The saga of mobile apps that was begun with a preloaded snake game on Nokia phone has taken giant leaps forward with technology advancements and has become something of utmost importance where it is a one stop solution to have almost any work done swiftly. As the world is inching towards 5G, the smartphones would increase the velocity at which the apps perform and thus the speed at which work is accomplished. That’s great news! 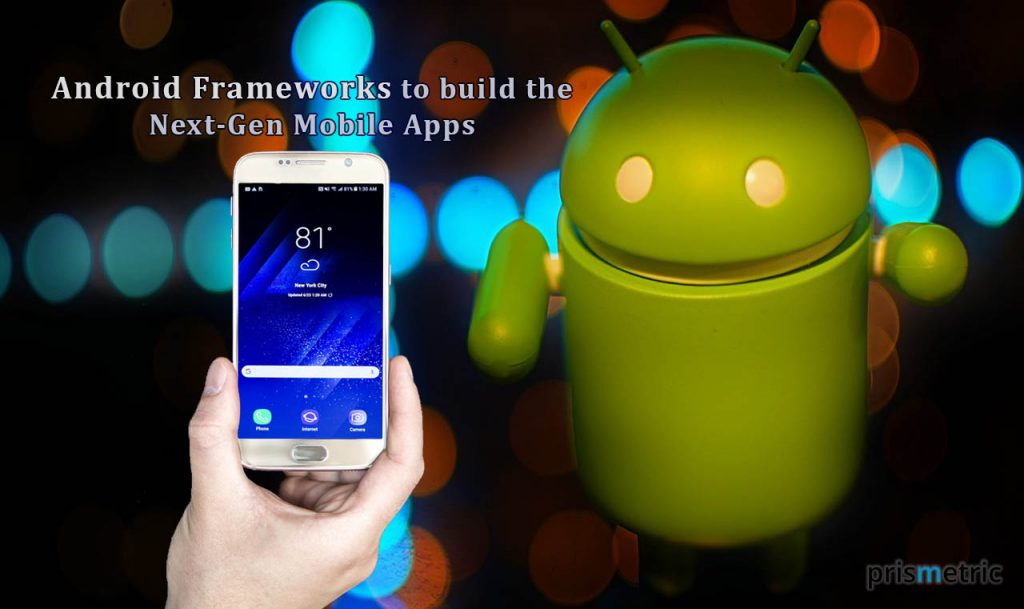 However, the background story speaks something else. Building apps come at the cost, time and efforts, which more often scare the rookie players. But, it’s not the complete truth. See how?

It is a known fact that Android platform dominates the mobile landscape with around 3 million applications on the Google Play Store and to add to it, Android boasts of being the OS run on most number of devices worldwide. All the Android apps are not necessarily built after the years of development efforts and with huge dollar investment. Building the apps within the defined budget and time frame is possible, but sometimes, the complexity level of the app makes the app development cycle long and the use of native tools makes the development difficult.

Plus, all the startups, SMBs, and big enterprises are not technically proficient or coding experts that can build the app leveraging native resources. This is where Android frameworks come into the scene that makes mobile app development simpler, quicker and easier.

The Android framework that’s mainly used for backend interaction enables the seamless exchange of the data between the app and the client’s server.

The ease to implement framework is a type-safe HTTP client for Android apps that alleviates the need to check the semantics of the queries sent over the network, specify the parameters correctly, provide functionalities for mocking response, custom headers, file uploads and downloads, and iron out the downloading of XML or JSON data from the web API.

The inbuilt mechanism in ReactiveX to handle errors is powerful to catch the errors in asynchronous computations. Also, the synchronization, low-level threading and concurrency issues can be easily abstracted through Observables and Schedulers.

The mobile database plays an important role in reducing the app development time. Realm framework is a great replacement for the heavy SQLite and core data as it saves the data in a matter of minutes that enable app development in a fraction of the time.

Additionally, it offers two-way data sync, real-time collaboration and offline experience, which can be incorporated in just 10 lines of code, and that makes building and integrating the difficult-to-build features in the world-class apps, just a matter of few hours.

Save your weeks of app development time, and develop agile apps that engineer best user experience.

During development, the app can crash anytime, and it’s necessary to identify where the bugs are that need to be fixed in the first place. The Crashlytics framework is a #1 solution which provides detailed crash reports to the developers in the real-time that helps in addressing the bugs instantly.

Integrating the framework provides more visibility into the app’s performance with actionable insights, even upto the line of code that’s becoming the reason of the app crash without crowding the app with excessive data.

It’s one of the popular payment frameworks which facilitate the customers to make a transaction and pay via nearly all the payment systems like- Apple Pay, Android Pay, PayPal, Bitcoin, and Venmo in the mobile app. The framework accepts the transaction mostly from all the nations and manages the transaction in the most secure way so that businesses can be secured from data theft issues.

Although the money transaction framework is open-source, but after integration, the owners need to pay for every transaction made through their app.

The framework uses JavaScript to build, test and deploy the native apps. The Titanium SDK provides the direct access to native APIs through JavaScript, which helps in engineering and delivering the Android mobile apps with improved user experience.

Also, visually developing and designing the app is feasible wherein the blocks of pre-built code can be arranged by simply dragging and dropping. With hyperloop, incorporating complex custom effects such as dynamic animation would become a work of an average Joe. The real-time analytics for every Android app provides more visibility into the app performance.

According to a research, on an average, the 10% of the smartphones in the world ran over titanium based applications.

Porting the web app into a mobile app has become a piece of cake with the mobile angular UI. The open source framework combining the power of Angular.JS and Bootstrap 3 provides the necessary mobile components such as sidebars, overlays, switches, fixed position navigation bars and scrollable areas to allow the developers create a better mobile experience.

Integrating the framework is super easy, as there are no jQuery dependencies or fat Bootstrap.JS, just by leveraging a couple of Angular.JS directives. The desktop experience can be transformed into a mobile experience alongside retaining the most of the Bootstrap 3.0 syntax.

Accomplishing tailored Android app development according to business needs in the minimum time, efforts and cost is viable with plenty of frameworks which are available for free. In a short while, the state-of-the-art frameworks are getting updated or new frameworks get rolled out in the market to turn your app idea into an app or turn the existing app into a polished product with new functionalities.

It indicates leveraging the Android frameworks and benefits the app developers much more than it’s probably thought. Now, it’s the turn of Android developers to raise a toast to success with aforesaid frameworks by crafting world-class apps.