The proliferation of smart mobile devices over the last decade has given rise to an app-driven society. Staggering but true, today consumers spend more time on their mobile apps than ever before. As a matter of fact, mobile web surfing as declined as app usage has witnessed a tremendous growth in the past 2 years. 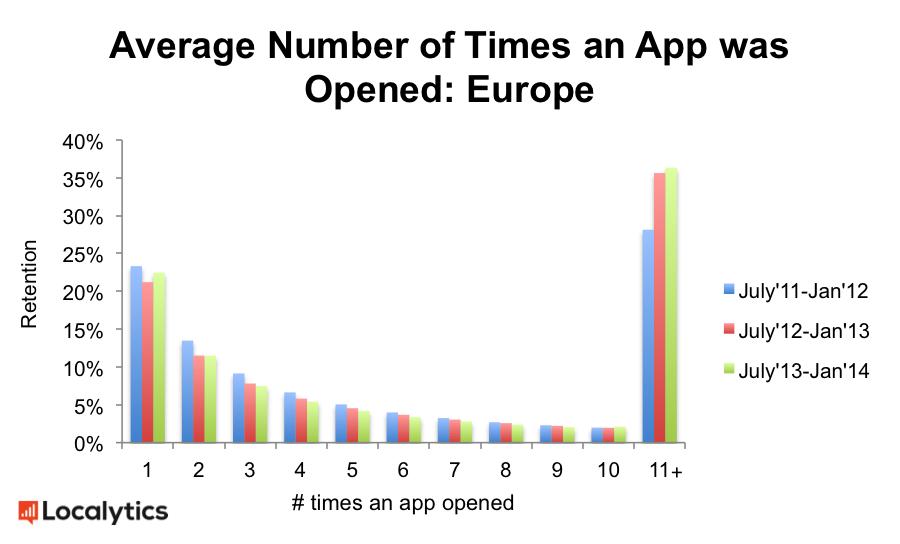 According to a report by Flurry, cutting-edge apps continue to dominate the mobile web and this has been the trend since 2013. A new research by Vision Mobile demonstrates that the mobile app market in Europe is growing at a steady pace and is estimated to reach its record growth of $16.5 billion in 2015. However, Europe’s share of the global app economy has fallen to 19% this year as against 24% in 2013.

The report by Vision Mobile states “App revenue in European nations will rise to $16.5 billion this year, compared to $13 billion in 2012, equivalent to 12% annual growth rate. Currently, the app economy’s global growth of 27% is double that of the European Union.” The app market in Europe is booming as mobile app usage is growing at a rapid pace over the past decade. This provides an opportunity for marketers to connect with their consumers by building more sophisticated and interesting apps that attract their attention.

Mobile app usage in Europe is witnessing a steady growth and enterprises are even finding it difficult to keep up with the demand. However, the mobile markets in Asian countries like China and India are growing a lot faster as compared to Europe. Both the countries are expected to contribute over 400 million new Smartphone users in 2015. Currently, Asia accounts for 3 times as much Smartphone sales as Europe. Despite this, the EU mobile app market still continues to grow, so much that demand is exceeding the supply. According to the report, “Demand outstrips supply with every self-respecting CIO or brand manager commissioning their own apps.”  Let us now see, what are the factors contributing to such steady growth in mobile app usage?

According to experts, a significant switch from ecommerce to m-commerce, cutting-edge Smartphone devices, and more engaging and personalized apps are some reasons behind growing mobile app usage recently. The current wave of growth in EU mobile apps is driven by increased usage of Smartphones, complemented with lower mobile tariffs. As a growing number of users access the Internet through their Smartphones, it has been a major driving force for the increase in mobile app usage.

Other relevant estimates by Vision Mobile reveal that the enterprise and business apps market in Europe is estimated to grow to $58 billion by the next year, the key reason being a growing demand for contracted apps across all EU verticals. Businesses would play a bigger role in the growth of the app market, but it may not still see a revolutionary growth yet. Additionally, a rise in mobile app usage in Europe will contribute to creating more job opportunities related directly to the app economy this year.