Augmented Reality, the technology that has blurred the line between the physical world and virtual world won’t have come into the spotlight unless the Pokemon Go was launched. Although many attempts were made in AR experimentation to transmogrify the users, the technology fails to sustain its appeal for a longer run.

With passing time, the technology which was considered only for entertainment is now taken seriously by the businesses and leveraging the same for potential use cases. Now, the revolutionizing technology is ruling the mobile industry and consumer space. 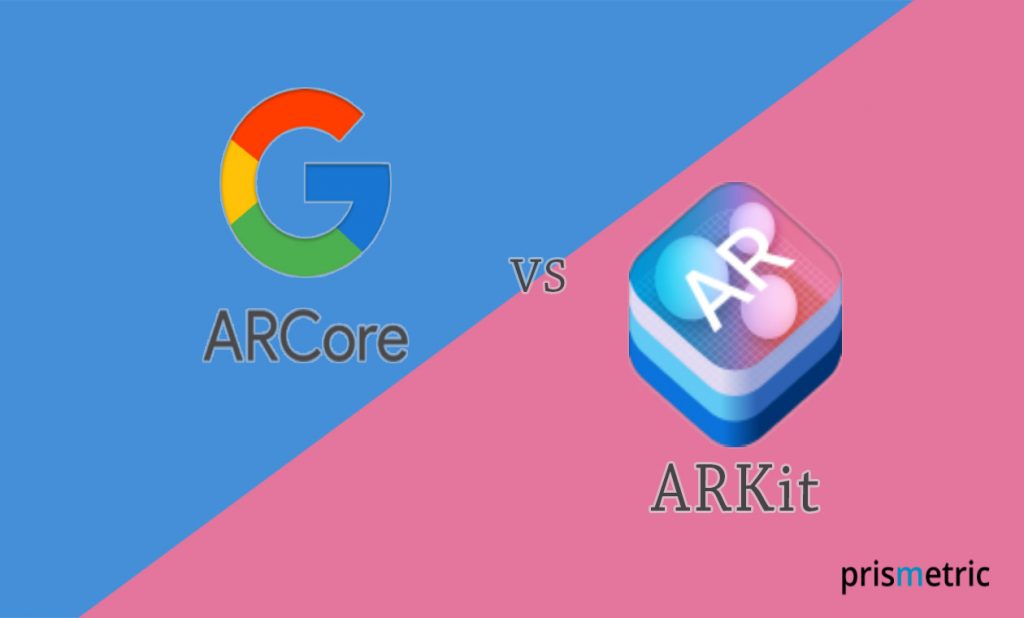 Foreseeing the potential, popularity, usability, and influence of augmented reality in the market, the tech giants, Apple and Google had quite earlier started working on the technology to stake their holds on AR territory. Google ARCore and Apple ARKit are the results of the same.

Yes, a few months back, ARCore and ARKit were released by Google and Apple respectively, that provides an augmented reality platform for the developers to make the most out of the sensors embedded in the smartphones.

Let’s pit and understand first what the Google ARCore and Apple ARKit are:

In an effort to improve the AR accessibility, the new AR SDK was released by Google that’s named ARCore which offers augmented reality technology capabilities to all the Android devices running Nougat or its later versions. Google’s latest release is quite different from the project Tango, but its essence is quite the same.

ARCore leveraging the sensors of the mobile phones detects the physical objects, environment, light, motion, and planes to better render the 3D AR content over the real world.

Furthermore, the Google is making efforts to bring the AR experience to the web with its prototype web-browser release, which allows the developers to create AR enhanced websites that will be platform neutral. Although the web-based AR experiment is in the experimental stage.

In WWDC developer’s conference, Apple made an important announcement for the app development community and that’s ARKit. The ARKit is a development kit for AR app development from Apple to engineer the unparalleled experience on the iPhones and iPads running iOS 11 or its later versions.

The ARKit will use the visual-inertial odometry technique that senses the motion with sensors and then combine it with computer vision analysis of the real world scene viewed through the mobile inbuilt camera.

The advantage that both the tech giants offered in the form AR SDK plays a vital role in crafting the AR apps at speed and with a great ease. Take a look at all the factors that help you decide whether you should build the next AR app leveraging Google ARCore or Apple ARKit to create an outstanding application.

Both AR-baked platforms work with Java/OpenGL, Unity, and Unreal engine, and similarly superimpose the AR content over the physical world precisely using the motion tracking, environment understanding, and light estimation without having any requirement of the additional hardware like- sensors or special camera to sense the AR object. For AR app development, just the smartphone is what’s needed as hardware.

It’s a good news. The users are not required to spend dollars on extra device purchase to enjoy the AR experience, but only if their smartphone is compatible with the latest OS version as specified by both the AR platforms. To get access to ARKit platform, the iPhone and iPad must be running iOS 11 and above, while for ARCore platform, the Android smartphones running on Android 7.0 Nougat and above will suffice.

Right now, ARKit SDK is available for the iOS developers to download from the Apple developer account on the devices that are upgraded to iOS 11 beta or above version and has Apple A9, A10, OR A11 processors. It supports Scene kit.

On the other hand, Google has also released its ARCore preview SDK for Android developers to start building brilliant AR applications. However, presently, the platform works just on Google Pixel and Samsung’s Galaxy S8 devices that are running Nougat and above. Soon, the support to all the Android devices running on Nougat or above software will be provided.

When The Apps Will Make Its Way To The Market

Well, it’s expected to see the AR apps on the Apple App Store and the Google Play Store available for download by the end of the year, but it’s not guaranteed. Even more, there are challenges in Android’s ARCore adoption despite the belief that Android is touted to provide the ARCore platform support to 100 million devices by the end of the year.

When upgrading the app to iOS 10 was analyzed, it was found that the update was rolled out to 90% of the iOS devices, and similar can be anticipated for iOS 11 version. The massive adoption of the iOS latest version may let the forums speculate that the first set of AR apps built on ARKit platform will soon appear on the app stores.

In iPhone and iPad, the Apple owns the full stack that enables the control from iOS software to every piece of the component in the iOS devices, and thereby the AR experience rendered through apps will be kept under control. This is not the case with Google devices as Android runs in the range of the devices of different sizes and specifications.

Additionally, the enablement of world tracking in the ARKit is notable that tracks the world through camera sensors, understand the scene and then merge the scene content with CoreMotion data. Later, the total amount of light in a scene is estimated to apply the same to virtual objects to deliver compelling virtual content.

This is from the technical advancement point of view, but speaking about things from the consumer perspective, about the quality comparison in the AR apps which will be built on the two different platforms, is a wait-and-see game.

What The Future Holds?

Augmented reality is the technology of 21st century that has altered the reality and make the eyes pop up with its pioneering virtual experience.

Although the state-of-the-art technology that has amazed the world with its potential has earlier failed to live up to the hype created. Here, Apple’s ARKit and Google’s ARCore release is a boon for the developers to build the groundbreaking apps with minimum time, efforts and resources investment. Also, it’s a step towards making the users happy with better and easier access to AR apps.

It sounds revolutionary! Are you ready to try your hands on the emerging technology and build the classic app at the top of any platform? Let us know your app requirements and move a step closer to bring your perfectly augmented dream to reality.