Decisive factors portraying the Benefits of Upgrading to iOS 10.3.1

Progress is a mark of continuous hard work and unwavering determination. It also depicts that the method of doing a particular task is correct and should be continued the same way. We all know that since the inception of smartphones, Apple has been the pioneer of technology; be it introducing new features or innovating the existing ones. 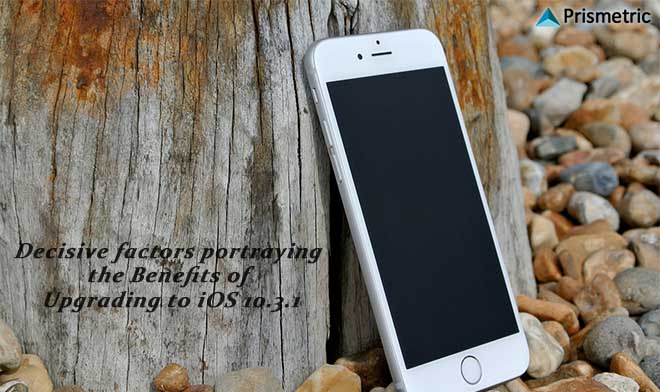 Continuing this trend, Apple has rolled out its latest version of OS, iOS 10.3.1 for iPhones and iPads. While the previous version i.e. iOS 10.3 was not compatible with the 32-bit devices, the new update in iOS 10.3.1 brings back the services to the 32-bit devices even for the on flagship phones like iPhone 5 and 5c. The new updated version is light on functioning, comes in with more bug fixes and security enhancements.

While iOS 10.3.1 is not big as his predecessor, the small changes made in it are quite important and essential from the user perspective as well. The users would get the previous features enhanced in a whole new manner that could have a dramatic effect on the overall performance of the smartphones and the mobile apps in it.

With the evolution of technology, the iPhone app developers are setting new benchmarks for mobile app development and will continue to do so with iOS 10.3.1. Let us now see the decisive factors showing the benefits of upgrading to the latest version.

This time we’ll have the sweet dish in the beginning only. No folks!! I am not taking you out on a dinner or something; it’s just that if you value security, iOS 10.3.1 is for you. Because it brings in a singular security patch with a potential of having a Wi-Fi exploit. iOS 10.3.1 will come with 60 security patches unlike the previous versions that brought in 14 known patches.

The security patches will make the protection layer more comprehensive and make your device ideal for storing all data and files without any risk or problem. Therefore, if security is your priority, you must go in for the iOS update.

If you are dealing with the performance issues or the bug attacks from the previous versions then you must considering in installing iOS 10.3.1 in your device. The reason being; that the update can have a positive effect on the performance and speed of your iOS devices. The iOS update can deal efficiently with the Bluetooth problems, lagging of the UI, Wi-Fi issues, bad battery life and much more.

The latest version will also prevent the maps from displaying the wrong location as it resets the location and privacy settings.  Moreover, if the user is dealing with problems that are intense, then installing iOS 10.3.1 is worth a try.

Apple works comprehensively in updating its apps and with iOS 10.3.1 the users can try the brand new application known as Clips. At the core, Clips is an app that lets the users create funny and animated videos with content that they have shot on their Apple device. The app has a plethora of effects like arrows, speech bubbles and banners that will enable the customers to create the best possible videos and also comes with a feature known as live tiles.

Thus, to embrace all the latest mobile apps like Clips, you must try out iOS 10.3.1.

With the latest version of iOS, it is easier to make the Apple ID settings, with the central location of the iCloud account. You just have to tap your name and photo on the top of the settings and quickly change all important related settings. The ID will help the user to access all the important features of iPhone and iPad settings, providing a direct link to the iClouds and all the other services provided by Apple.

The ID will have all the shortcuts related to the device in My iPhone which will include cloud backup, serial number, IMEI and Apple pay card.

iOS 10.3.1 will help you switch to a new file system as it has the new APFS switch. The switch will enable to speed up the older devices so that they could form a better integration with the OS be it TV or wearables. The advanced file system will also help in freeing up some space from the phone memory so that the device can accumulate more number of mobile apps.

The above-mentioned features are some of the top reasons that would compel you to try out and install iOS 10.3.1. Apple with the latest OS version has basically covered up all the minor loopholes that were haunting them in the previous versions.