No one of us likes to spend time with a mean kid that put us in an uncomfortable spot, but when our parents are friends and they said you have to; Alas! We are left with no option. It’s disappointing.

The developers using the Android Studio IDE for Android app development shares the resemblance with a kid’s story because the IDE was not performing like a good friend with which app development becomes a joyful task. The speed, stability, quality, and a couple of bugs-related problems have made app development quite a task for the developers.

When Google heard such feedback about the most beloved IDE, they stopped the team which is working on the release of some cool features and make them a part of ‘Marble’ project that’s aimed towards making the IDE brilliant. This, in turn, allows the developers to perform to the peak efficiency. This is why Google developers rolled up the sleeves and went into stability, speed, and quality fixing mode.

In a round of 8 months that are spent on Marble project, 600 bugs, 21 IDE hang, and more than 50 leakages are fixed, in addition to improved XML & Kotlin typing latency, system health upgrade, and polishing of existTakeawayTakeaway

ing features. So, the notable changes made the debut in Android Studio 3.5 will focus mainly on three areas, namely- system improvement, polished features, and the bugs removed.

Let’s dive in a categorized manner: 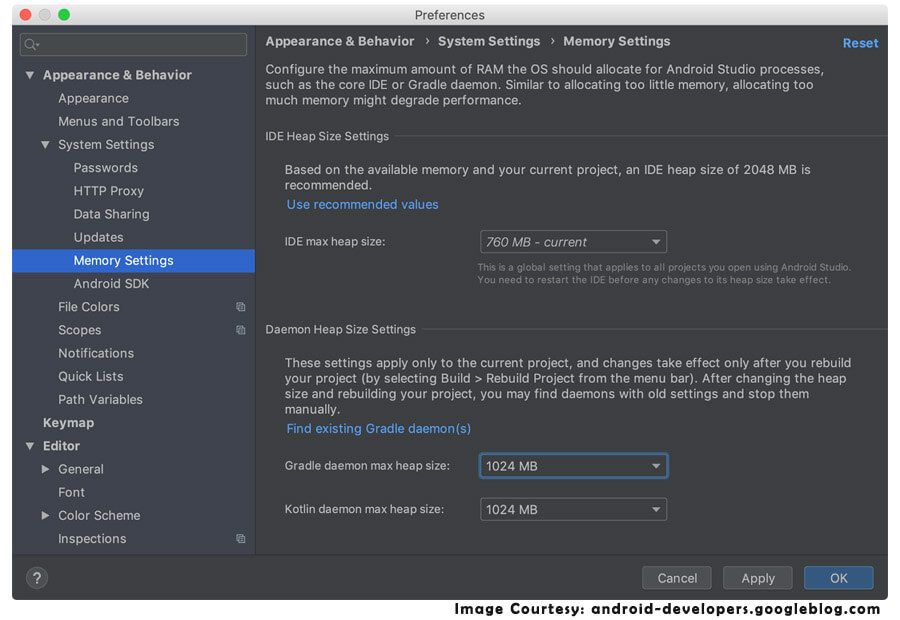 In the project with large size, more code is written, more resources are required, more language features are leveraged, additional Gradle plugins are used, and non-incremental annotation processors are utilized, which gradually makes the build slow, and even beyond the immediate control. Well, slowing down the build to improve its speed is a temporary solution.

Under the project marble, the significant improvements are made in build speed, including the addition of R light class generation, lazy task and worker API; making annotation processor incremental such as glide, dagger, or auto service; collaborating with Gradle inc. and JetBrains for performance enhancements.

While writing code in XML files, it’s experienced that UI thread freezes out without any reason and that last sometimes longer than a couple of minutes. Even, sometimes, it crashes out or needs to be force-closed that’s negatively impacting the performance. The underlying infrastructure of the IntelliJ platform is extended and XML typing is optimized that has brought improvements in the XML typing latency.

The Android Studio developers that are using Microsoft windows have reported Google about the installation speed and build times that were continuously getting slower. The higher access time for disk I/O was because of the folders that have so many small files that are created or removed under the anti-virus programs. In the return, it’s partially taxing disk I/O output and CPU, and thus, the build performance.

In the latest version, the IDE is improved to check various directories getting impacted with a slowdown, compare them with the list of anti-virus directories, and then display a notification for the optimal set-up of the discovered inconsistency.

The fast and responsive emulator accelerates the app development, but the Android emulator is suffering from excessive CPU cycles and memory. The investigation revealed that Google play services and other services keep running in the background because the emulator is set to AC charging (By default) instead of battery discharging.

When default settings are changed wherein the emulator is set to battery discharging alongside a couple of optimizations made to the emulator, the CPU usage decreased by three folds.

Know About: Features and functionalities in Android 10 to help improve the precision of the efficient android app developers.

When the project is re-opened, it unexpectedly triggers the red symbols in the app code because Gradle build caches all the dependencies in the home directory and these caches are periodically deleted to save hard drive space. In the unawareness of this fact, IDE generates red symbols for the missing dependencies. In the latest version, the conditional logic is created to address the issue arising during project sync.

Making changes in the code and instantly previewing them without restarting the app enables rapid app development. The previously launched instant run feature failed to perform as expected, so a new feature- apply changes is created from the ground-up. Leveraging the platform-specific APIs from Android Oreo and later OS, Apply Changes feature does not modify the APK and allow the developers to edit the code and see changes in the real-time.

When working with ConstraintLayout, the numerous performance and error-prone usability issues pops-up that mandates XML editing. That’s why a varying degree of interactions from constraint selection and deletion are refined to improve the device preview resizing which boosts productivity while creating and editing layouts.

During the creation of data binding expressions in XML files, several hangs start emerging in the code editor. The problem is fixed alongside significant improvements that are brought to code completion, navigation, and refactoring.The latest Google’s Android Studio 3.5 launched with system improvement and polished features. Here we discussed every fundamental change which needs to know every android developer.

In the app bundle, the developers had some enhancement needs that allow them to set certain device configuration requirements such as OpenGL versions, support for Augmented Reality, or set conditions based on API level for dynamic feature modules that are automatically downloaded during app install. The conditional delivery features are added to the app bundles which allow developers to set conditional delivery based on hardware features.

In the recent developer’s conference, Google showcased a preview version of Android Studio for its Chrome OS, which has now received full official support high-end x86 based Chromebooks. Additionally, Google has also specified hardware requirements for Chromebooks, and the list of Chromebook devices recommended by Google.

Under the project Marble, Google has aimed to just improving its IDE rather than making new additions. Well, Google’s step towards halting regular development and making the IDE perform faster, become stable, and less resource-demanding has benefited the android app developers In terms of increased productivity) and made app development an enjoyable task with Android Studio IDE. What else Google has planned for the next version is not revealed yet? If any news we get from Google, we would love to share it with you, so stay tuned with us.