They are everywhere, donning different hats, doing various works, coming in invariant shapes and sizes. We are not talking about any spirit of ghosts folks; we are just trying to give you an idea about the ubiquitous nature of mobile apps. The technology expansion has made the mobile apps omnipresent in the modern age. The insurgence of platforms such as Android, iOS, Windows, Blackberry, etc. has made the mobile apps accessible to anyone and once being a luxury, mobile apps are a necessity in the present age. 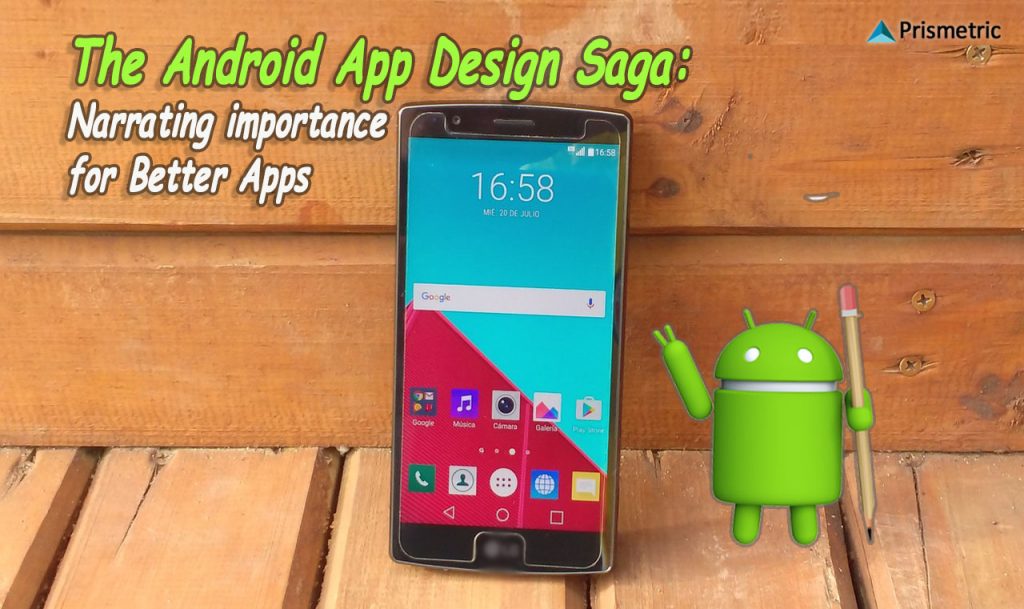 Android app design is not only important for bringing in new customers or retaining them, it also depicts the brand value of your company. A profound app design will bring in more downloads which gradually increases the ROI of the organization.

Therefore, let us put the foot on the accelerator and find out the significance;

Being aware of the device Sizes

Android platform can be regarded as the mobile platform for the masses. Therefore, despite using the same version, variance in device screen sizes and resolution should be taken care of.  For example, a high-end Android powered phone can have a different resolution and screen size as compared to a generic Android phone. For your app to look consistently good, the app interface elements and the graphics need to be synchronized and scalable.

Thus, the Android mobile app designers must be fully aware of the latest ongoing trends in the market and design the app accordingly so that the app will run and display properly on the number of devices.

It is a no brainer that in almost all the cases, the mobile app will be used when the smartphone is in the hand of the user. Therefore, it is utter necessary for the app designers to look at the minute ergonomics while designing the mobile so that the user will not feel any awkwardness while feeling the app. The touch layout of the app should be done according to the function and the usage of the app and have the necessary things arranged accordingly.

Apart from layout, keep a close watch on what things you want to show to your users either physically or visually. Include visual cues which indicate if the buttons or features are that are either touchable or accessible and whether it has been touched before. A prominent design of the Android app will enable the customers to go through the functionalities of the app at one go without any fuss or hesitation.

Before the inception of the app itself, ask yourself the most important question- Who is my audience? It seems a simple question in the first look but holds the most prominent position in deciding the future of the Android app. Recognizing your targeted audience in the initial phase will make it easy for your app designers to plan the functionalities of the app according to the user preferences making it valuable in grabbing more attention.

Also, user identification will have an assertive impact on luring the audience and targeting their pain points more frequently. Along with this, it will reduce the marketing cost of the app as the company can target more users with limited resources. The aptly designed Android Apps according to user perspective will compel them to hook into the app for long hours and as a result increasing the user engagement time by leaps and bounces.

In the process of Android mobile app design, the designers must think to include more tapping options instead of clicking. The touch or tapping devices will help the user to perform several gestures such as swiping or scrolling with ease and also will provide them new and abundant ways of interacting with the app. Also, it will embrace The usability of a mobile app will give even the novice user a full intuitive experience. A comprehensive Android app design will also make the user onboarding process easier and hassle free.

The gestures in the Android app design will help the mobile app with some unique features which will be instrumental in keeping the user interactions positive and also provide a peculiar identity to the mobile app.

App design is the first point of interaction of the app with the user and is crucial in keeping them loyal with the app for a long time. Moreover, it increases the brand value of the app and also becomes a medium for better social media interaction. Hire expert Android App Developers who will work with the app designers to build an enticing and efficient app design.

How do you Design a Mobile App? – Best Practices to follow Why Wireframing is Important in App Development?