iOS is by far the most sought after and prolific mobile OS platform around the globe in the present times. There are several reasons for it, for example, it is a secure mobile app platform, generating the highest amount of revenue and having an enormous and strong customer base to go along. iOS has by far been the benchmark for delivering engaging powerful user experiences with an apt user interface design. 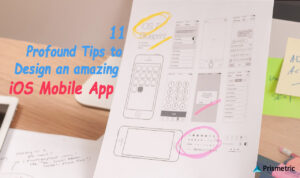 Apple also makes sure to innovate itself with every new iOS version so as to provide the best possible service to the users. Being a pioneer in mobile app development, Apple also understands the importance that mobile phones hold in the present generation. Thus, providing the customers with the best possible design and outlook becomes an utmost necessity.

A free flowing iOS app design will help the users to understand about the functionalities of the app in a proper manner and also guide them to use in a fuss free way. This will help the mobile apps to be more productive and also the user can leverage their maximum facilities.

Talented iOS App Developers for hire will always have a thoughtful design in place as a reference to look to in case of any requirements during the development phase.

The mobile app designers should also go through the App Store before beginning their designing work as Apple states the guideline quite clearly there. Using those guidelines along with the tips will surely help you to design a successful iOS app.

The icon is the face of your app and if it is designed in an awesome manner, your app will be already ahead of its contemporaries. For designing an amazing icon all you need to do is to focus on the things done by your app and make it visible to the customers. Design the icon in a transparent manner and make sure that it is visually attractive at the same time. Also, beware of the fact that the iOS users are pretty choosy about the icon’s size so devote time in building the icon in the sleekest manner so that it looks good on the screen.

The app interfaces should be simple, yet intuitive and must give the native feel to the viewers. The iOS mobile app designers should keep a watch of keeping the visual appeal intact so as to keep the users interested in the app. The interface should be such information that the users can operate the app without using any kind of tutorials or guidelines.

This might be the most basic, yet is the most important one. Before commencing your designing process, make sure that you consider the basic frameworks before including the other functional blocks. You can do this by drawing a complete flow chart of the mobile app and then link all the bits together. Also, ask feedbacks from the person who is technically not connected with your project so as to know their unbiased reviews. This will help you to know how the design is going to appeal to your targeted audience in the real world.

The view of the App

Generally, it is the table view that is used for listing the content in the iOS mobile app. The reason for this is this method is very basic and precisely customized for every level for the smallest elements. For the users too, the table view provides various styles and accessories that can be taken into account. The list view will also be beneficial in providing the complete guide to the user and has the option to group the cells if required.

Whether the iOS app is a luxury, utility or messaging app, a keyboard is necessary as it is the prime source for giving information to the app, whether it is a chat, or a login or just an online search. Therefore, customize the keyboard style so that it can incorporate email, phone numbers and even emoticons. Also, make sure that you have selected the right themes for the action buttons on the keyboard.

There is a famous saying, “When in Rome, do as the Romans do.” The same thing applies here as well when working with the iOS mobile app; use the San Francisco font for better readability. This default font in usage is created by the in-house Apple team and thus is very compact in a display. Along with this, the UI display and the UI text in the SF font is something that you can be sure of.

Providing the ease of Navigation

After the icon, it’s the navigation bar of your iOS app that gives the information about the app. So design the navigation bar by keeping the left side for a profile, menu buttons and Back option and the right portion for actions like add, edit or completing the work. Also, customize the background according to the status bar so that it falls perfectly in sync and doesn’t get mixed with each other.

With its ever-evolving technique, iOS has provided the virtue of 3D touch to the users. This transpires them to go about their work in a rapid pace in and out of the app. The users can now force press the App icon to look into the things they have searched on a frequent basis. Also, the designers have created the shortcuts which will help in increasing the productivity and help the users to perform repeated tasks quickly.

The mobile app designers should clearly understand that the iPhone comprises of four main resolutions, thus the app layout should be designed according to that only. The mobile app design layout should depend on the resolution of the mobile phone and not on the dimensions. For example, the navigation bar varies in width but stays constant with the length. The elements within it should vary according to the variation of the bar.

The standard size for the buttons in an iOS mobile app is 12pt for small text, 17 for the body or main text and 20pt+ for the tiles.

Spacing between and the Touch Controls

The minimum margin that is preferred here is 8pt. This is because it provides enough space which makes the mobile app design look clean and easier to scan and read. Moreover, UI elements must be aligned properly and should have similar baseline position.

The touch controls should be simple and very precise as they are grafted to make the app interaction process more natural.

Last Thoughts
Make no mistake folks; the design process for an iOS mobile app is a very serious process. The mobile app designer must have a clear understanding of the process so as to culminate an innovative design. A competent mobile app design is capable of bringing unprecedented glory to your mobile app and getting your iOS mobile app miles ahead of your competitors.